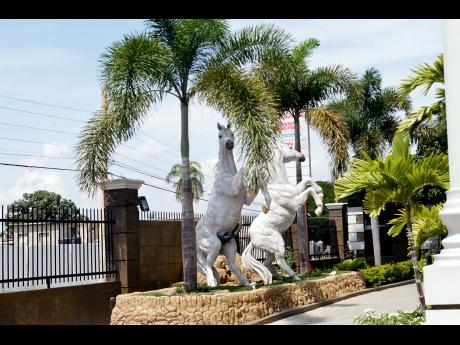 The penis on this male horse has caught the attention of many females.

The First Union Financial Group has erected statues of two life-size horses outside its head office located on Eastwood Park Road in St Andrew, and they have been getting a lot of attention from members of the public, especially because of the large penis on the male replica.

"I realise that females really love it. A lot them started to take pictures of them, but that wasn't the intent," Lloyd Campbell, the chairman for the First Union Financial Group, told THE WEEKEND STAR.

Instead, he said that the statues were created to show the strength of the company, which has been operating in Jamaica since 1999.

"Part of the logo in one of our companies has the head of a horse, and we decided that we wanted to have a full sculpture of the horse to enhance the whole architectural design of the building," he explained.

Created by Jamaican artist Scheed Cole, at a cost $1.8 million, the horses took approximately seven months to be completed and were unveiled just three weeks ago. Campbell said that the statues are unique to the head office, and there are no plans to have them placed at other branches.

"It shows strength in us. Typically, horses are strong creatures, so it shows that we are strong as a company, and that sends the right signal to the public and our customers that we are here to stay," Campbell said.

Pointing to the discussion that surrounded the statues at Emancipation Park, Campbell said that persons have began to appreciate art more and that the erection of the statues was intended to be a conversational piece.

"It shows me that the horse is strong, it is vibrant, and that is what our company is. Persons may say it has to do with sex, but it has nothing to do with sex. It is just nature," he said.