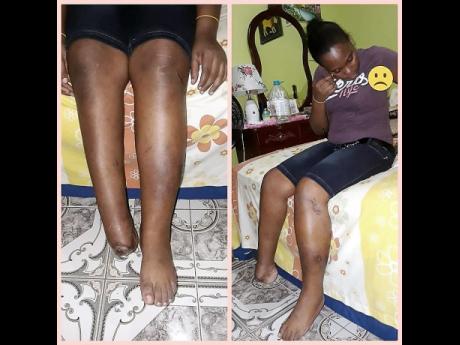 Safoy Fearon after her accident. 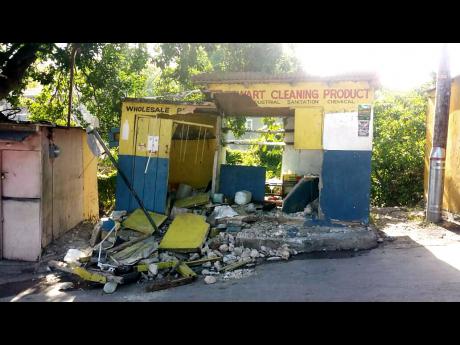 The shop in which Fearon was standing when it was hit by a truck.
1
2

While taking shelter from the rain at a shop in Steer Town, St Ann, on July 28 last year, Safoy Fearon was struck by a truck which pinned her in a building for several minutes.

"I saw the truck coming with a speed. There was no way I could run off or anything and it came exactly straight into the shop," said Fearon, who was standing at the door of the chemical shop.

As a result of the accident, she lost all of the toes on her right foot and suffered a pelvic fracture.

Fearon said she spent three weeks in the St Ann's Bay Hospital before being discharged.

But two weeks later, she had to do plastic surgery at the National Chest Hospital in Kingston.

"I spent three weeks over there after I do the surgery. They removed a part of my skin and covered up a part of the foot," said Fearon, who moves around on crutches.

Fearon, who was a chef at the Melia Braco Hotel before the accident, hasn't worked since last year, but she says she would like a prosthetic leg in order to get a job.

"I can't do no more 'standing up' work. When I was working in the kitchen, I used to stand up for more than eight hours," she explained.

Frustrated by sitting at home every day, Fearon, who turned 23 recently, says she would be willing to find a job that didn't require her to be on her feet for long periods.

"All I do is sift through the TV 20 times fi di day and watch di same thing. Everybody get up and gone a work and a just mi and mi mom woulda deh home until mi likkle nephew come from school," she said.

Having exhausted the money she had saved on medical expenses, she says she has opened a Scotibank account to assist in clearing outstanding medical fees and to help purchase the leg.

"I was trying the GoFundMe but mi did have likkle saving still. Other people woulda come in and gi mi a likkle thousand dollar and mi woulda save it up and buy medical stuff, plus some people also jump roun' and assist," she said.