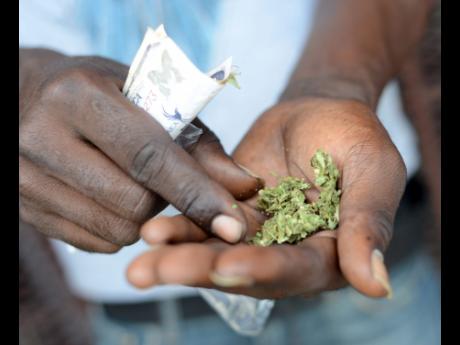 Preparing a ganja spliff on the streets of downtown Kingston.

An 82-year-old man who was arrested after he was found with four ounces of ganja inside an igloo told the St James Parish Court that he was under doctor's orders to use the contraband.

Lascelles Allen pleaded guilty to possession of ganja when he appeared before presiding parish judge Sandria Wong-Small last Wednesday, but told her that the ganja was for medicinal purposes.

"My doctor recommended that I should use it," said Allen, regarding the ganja.

"So what should I do with you today?" asked Wong-Small.

"Charge me whatever you want to charge me," Allen replied.

"I could give you a term of imprisonment," Wong-Small warned him.

"I'm too old for that, Your Honour," the senior citizen quipped.

The date of the incident was not disclosed, but the court was told that the police visited a shop located on premises where Allen resides.

While conducting a search of the area, they found the ganja inside an igloo in the shop. Allen was subsequently arrested and charged.

The accused man was subsequently ordered to pay a fine of J$1,000 or spend 30 days in jail for possession of ganja.

"Keep it somewhere where it doesn't appear as if it is being sold. As old as you are, you are not exempt from the law," Wong-Small warned Allen as she disposed of his case.