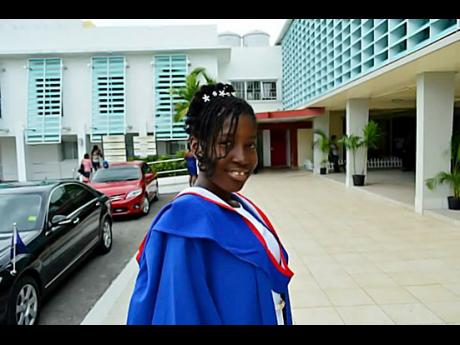 Megan McHugh is in need of blood.

With a trip out of the island on the horizon, Megan McHugh, who suffers from sickle-cell disease, went to the University Hospital of the West Indies (UHWI) on July 9 for a check-up to make sure everything was OK. However, the tests revealed that her blood count was low.

Her mother, Jennifer McHugh, who told THE STAR that Megan, 26, a graduate of the University of West Indies, was diagnosed with sickle-cell at four years old, said, "She got a petition [and] came home, but before the day was out, she began feeling really ill, and we had to cart her off to the hospital."

She was treated in the wee hours of Tuesday morning and released. However, that same afternoon, she had to be rushed back to the hospital, and on that occasion, she was admitted.

"About the Thursday, she transferred to the St Joseph's Hospital because they thought that she had made enough progress that she could be in a recovering facility," Jennifer McHugh said.

But her mom said that while there, she got a call that her daughter's condition had deteriorated, and they had to send her back to UHWI.

And days after, Jennifer received another call informing her that Megan had been transferred to the critical care unit because her condition had worsened.

But Jennifer, through the power of prayer, said that although her daughter is in need of blood, she is on the path to recovery.

"Tons of people have been praying - God has touched her and she is recuperating, but she is still in the critical care unit," she explained.

She also said that Megan's blood will have to be transfused to bring the blood count up to normal. However, there have been some issues.

"The result was not what we would be comfortable with, and the second reason for the blood drive is that she carries a very rare blood type, which is the B+, not very easily found. So, we were told that the bigger the pool of donors is, the higher the likelihood of finding some of this type of blood because of its rarity," Jennifer explained.

As a result, she is asking persons to donate blood at the Blood Bank on Slipe Pen Road and specify that the donation is for Megan McHugh at the University Hospital of the West Indies.