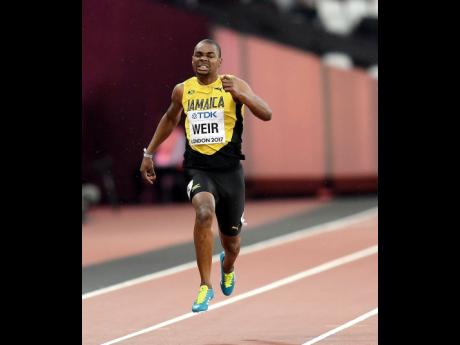 Olympian Warren Weir has apologised to the police following a flurry of criticism arising out of his behaviour during a stop and search recently.

Weir, writing on Instagram, said he was moved to apologise for his behaviour after discussions with his family and friends, and the negative feedback to the videos of the incident that were posted on the Internet.

Videos of the incident show a police corporal in disbelief when he realised that the mouthy motorist was Weir. And when asked whether he is the Warren Weir, the ambassador, Weir said he is Weir, a Jamaican.

During the search, Weir ridiculed the officers, while expressing he was unfairly targeted because he owns a nice SUV.

The police reportedly signalled the athlete to stop and during the spot check, Weir's BMW SUV was searched and documents checked.

However, the athlete did not take kindly to the approach of the police and questioned the motive behind their actions.

Both Weir and the police recorded the encounter which ended with Weir receiving a ticket for excessive tint.

In his apology, which was posted Tuesday evening, Weir said the incident has given him the opportunity to look at how he can handle further encounters with the police. He said he has reflected on how his posts can "affect not just immediate friends and family, but also those who look up to and support me as an athlete, national representative and entrepreneur".