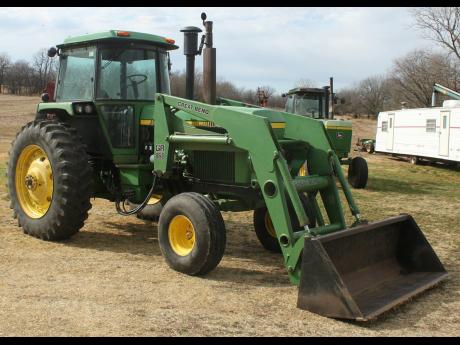 George Sinclair lost a tractor similar to this one.

After spending more than 20 years in the Cayman Islands doing construction work, George Sinclair returned to Jamaica and purchased a tractor for $4 million.

He said that the 1979 John Deere 4440 tractor was his "sole investment" from which he planned to survive when he retired.

"I don't have a house because I pay rent. I invest that money so that it can roll over, but now it gone," Sinclair said.

The father of four said his tractor has gone missing without a trace, and his world has been turned upside down.

Sinclair said that his ordeal began after he got a ploughing job on farm in Grange Lane, St Catherine. While ploughing the land, one of the tractor's tyres burst. The man whose land he was ploughing agreed that he could leave the tractor there until it was repaired.

"I told him that I am financially drained because a tyre, at that time, cost $100,000. I used all the money to buy the tractor and ship it," Sinclair said.

But being unable to buy a tyre for his tractor, Sinclair left it sitting on the farm in Grange Lane. And then, after four years at the spot, the tractor disappeared.

"I go to look at the tractor every now and then. One time I go, and the ignition missing. Then another time, the air pipe missing, so me call him and a tell him what is happening. I really wanted to move it, but I couldn't afford to," he said.

The property owner told THE WEEKEND STAR that he had told Sinclair on several occasions to remove the tractor from his land because it had been on his property for too long.

He said that the tractor had become the home of wasps and was an eyesore for his farmland.

"I told him to come and take it off the farm because it became old and scrap down. It became a sore eye for the front of my farm because I sometimes use it for entertainment purposes," the man said.

After getting no response from Sinclair, the property owner said that he told some men to take the tractor off the property.

"A nuh nobody teef the tractor. A mi tell some man fi tek it. It deh pan the farm for six to seven years," he said.

He said that it would be impossible for Sinclair to get the old junk back because he does not know the men who took the tractor and is not aware of where they have taken it.

Sinclair, 56-year-old, said he has been suffering as a result of the loss of his tractor. He said that there are days he has to ask family members and friends to pray for him because he is severely stressed.