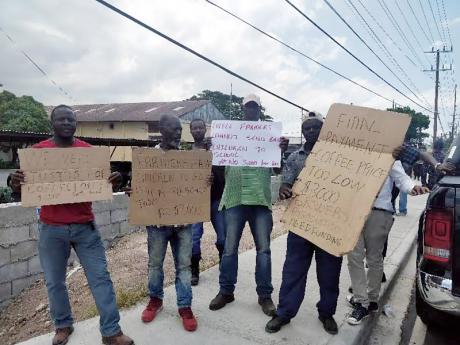 Farmers protested the fall in the price of their coffee yesterday on Marcus Garvey Drive in Kingston.

The local coffee farmers took to the streets on Marcus Garvey Drive in Kingston yesterday morning demonstrating their frustrations with the Coffee Board.

This comes after they were told that their coffee would now be bought at $3,000 per box, instead of the $6,000 that was originally agreed on.

"The coffee now a go down, it not even in the middle, all because a the bigger farmers them. When dem a drop the coffee prices, none of these people meet wid the local coffee farmers and ask how much it cost we to grow it and everything," said Syril Ogilvie, who has been a coffee farmer for 23 years.

A representative from the Mavis Bank Coffee Factory, Mark McIntosh, was trying to calm the farmers as they voiced their disappointment.

He said that the price fall was necessary because they are losing profits as outside buyers want a cheaper price.

However, the farmers were adamant that they needed their 'back pay' from the board as they were only paid $4,000 for each box they sold from last October.

"Mi never get no $6,000 last year. When me start sell mi coffee in October to them, I was paid $4,000 per box, but mi did a expect seh mi a go get mi back pay. Now mi a hear seh unu nuh have no money for us. How that?" Renford Williams, a coffee farmer for almost 50 years, asked.

McIntosh explained that the price of coffee fell to $4,000 from last October because the factory was not making any profit as buyers are not purchasing coffee above a certain price.

"People thought that when we dropped the price to $4,000, it was because of a case of low cash flow, but it wasn't. So we don't have any back money for you guys," he said.

Still adamant that things need to change, the farmers said they cannot sell their coffee for $3,000 because they will not be making any money.

They demanded a meeting with the Coffee Board to resolve this issue or they would be taking things in their own hands.