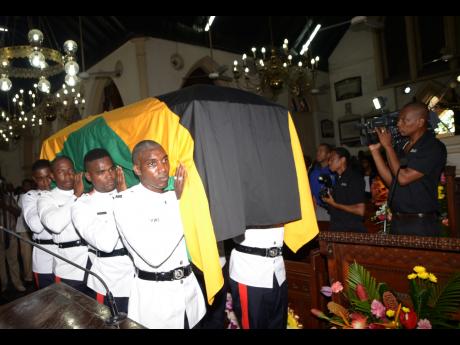 Pall-bearers from the Jamaica Constabulary Force carry the coffin of the late Member of Parliament and Government Minister Easton Douglas inside the St Andrew Parish Church yesterday, before the commemcement of his funeral.

A section of the road leading into Black River from Sandy Ground in St Elizabeth will be closed for the next six weeks. The National Works Agency says the closure is to facilitate the road's reconstruction. Defective waterlines will also be replaced.

The closure, which will impact the section of road in the vicinity of Hodges Aggregates and Powder Limited, will result in traffic being rerouted.

Motorists travelling from the direction of Sandy Ground towards Black River are being advised to continue through the round-a-bout, to the community of Speculation, keep right into the Hodges community, exiting at High Street.

A Montego Bay-based hotel supervisor is now in police custody after he was caught with drugs hidden in an umbrella.

According to reports, at about 11:20 p.m., on Wednesday night, a team of police officers were carrying out routine patrols along McKenzie Drive in Flankers, St James when the man was seen acting in a suspicious manner. He was stopped, searched and the drugs allegedly found.

"He had the 23 packages in the draw string bag and two parcels tied inside the umbrella, which was closed," said a police officer, who was at the location. "He pretty much gave away himself because he was acting both strange and nervous."

Parents of students sitting the Primary Exit Profile (PEP) are being assured that enough materials will be provided to adequately prepare students for the upcoming examination.

Education Minister Ruel Reid said sample items and practice materials are to be made available to the education system and will be accessible free of cost.

"We're going to also have these practice materials online (on) an exclusive website. All materials necessary for assisting in preparing our students, as well as teachers to deliver the National Standards Curriculum (NSC) and PEP, are going to be made available to the society," he said. Addressing the concerns of some parents who had purchased workbooks designed for the obsolete Grade Six Achievement Test, Reid insisted that students will have "limited preparation in utilising those books for PEP".

He urged parents not to panic, as the Ministry will "provide the core curriculum texts for the (primary school) system".

An additional 300 closed-circuit television cameras (CCTV) will be installed in public spaces in Montego Bay by year end under the National Security Ministry's JamaicaEye Initiative.

Project Coordinator, Emil Holgate, said the measure will serve to improve the safety and security of residents. "That does not mean that we will stop at 300, because we will have more phases as we go along," he noted. He informed that 106 cameras have already been installed in Montego Bay, 70 of which are operational. He said that crime mapping and crime data will be used to determine the locations for the other cameras.

As part of its violence-prevention and early intervention efforts, the Education Ministry, through its Safety and Security in Schools Unit, has secured 500 metal detectors for the 2018/19 school year, up from the 130 detectors procured in 2017.

Director of Safety and Security in the Unit, Assistant Superintendent of Police Coleridge Minto, said 30 walk-through scanners have also been secured for this school year, up from five in 2017.

The equipment was secured through the Ministry's partnership with the United States Agency for International Development, which has provided US$3 million in funding under the Safe Schools Programme.

Minto said funding has also been provided for perimeter fencing, cameras, capacity-building training and support to uniformed groups in schools.

The Ministry of Tourism in partnership with the Culture Ministry will host the 'Love is the Answer' social event and exposition this Sunday, as part of the 'Build' component of the Zone of Special Operations (ZOSO).

The event will be held at the Denham Town Community Centre starting at 2 p.m.

The purpose of the event is to use social intervention to foster community renewal and expand opportunities for the community's socioeconomic sustainability.

The event will highlight various services offered by both government/non-government agencies and capacity building and training programmes, which may be beneficial to members of the community.

The day will culminate with an entertainment package featuring Agent Sasco.