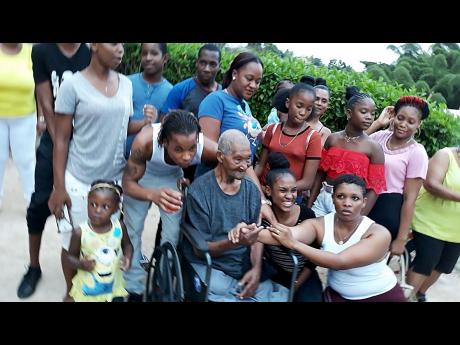 Stephen Wright flanked by his grand and great-grandchildren.

On August 4, Stephen Wright celebrated his 117th birthday, and from the way he revelled in the festivities, his family is anticipating many more years with him.

CENTRAL STAR had a chat with the centenarian, who hails from Spaldings in Clarendon, on the secret to his longevity.

He was quick to share that it was all in his careful eating and drinking habits.

Wright said he has never eaten or drank anything that comes out of the refrigerator and he is a man who thoroughly enjoys his ground provisions as well as his porridge and soup.

"I enjoy yam, banana, dasheen, porridge and soup," he said.

Wright, who was born in St Elizabeth, came to live in Clarendon at the age of five.

As much as technology is far advanced in today's world, Wright said he would not trade the good old days for anything.

For him, today's generation might be more educated, but they are not as committed to family and the kind of proper planning that goes into a diet for the children.

"We carried water on our heads for our plants and animals," he said bemoaning the fact that this generation is so technologically inclined that they have stopped planting naturally grown, healthy food.

TOO MUCH FAST FOOD

Wright believes too much fast food is being consumed, and he sees it as 'inferior' foods.

Echoing the words used in the 'grow what you eat, eat what you grow' campaign, Wright said Jamaicans need to stop importing and consume their own produce.

"We must eat what we grow ... . An educated nation should be able to feed itself," he said.

Wright, who never drank alcohol or smoked, said that in his younger days, he enjoyed playing cricket and dominoes.