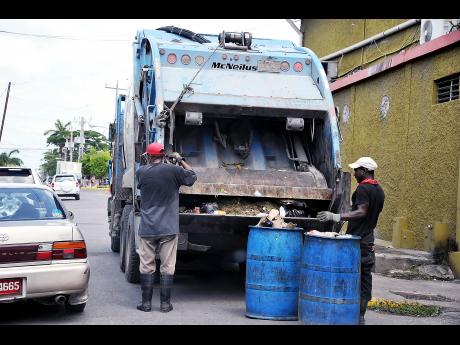 The shortage of compactors to collect domestic and commercial garbage is having a severe effect on some rural communities in St Elizabeth.

Despite there being four garbage compactors, each operating two eight-hour shifts, residents continue to complain about a pile-up of garbage in some sections of the parish.

Councillors for the New Market and Myersville divisions, Richard Solomon and Layton Smith, respectively, complained at the recent municipal corporation meeting that there is a serious pile-up of garbage in sections of their divisions.

Both councillors say the piles have now become breeding grounds for rodents and other household pests.

In trying to give an explanation for the cause of the problem, representative of Southern Parks and Markets Waste Management Ltd Donovan Williams stated that there has been a cutback of one eight-hour shift in the parish due to the inadequate number of trucks.

"The parish needs a fleet of five trucks to effectively service the needs of householders and the commercial sector," Williams said.

While acknowledging that there is a backlog in the collection of domestic garbage, Williams outlined that the agency is doing its best with the resources available.

Mayor Derrick Sangster, in an effort to try to ease the problem, stated that he would be seeking a meeting with the National Solid Waste Management Authority's regional manager to discuss the situation in an effort to see how quickly the problem can be addressed.