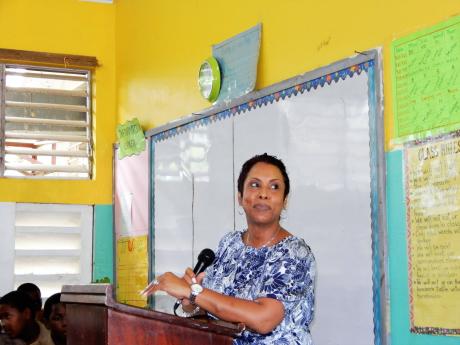 Heather Depass said she went to bed one night and got a vision. In that vision, the Delta Atlanta station manager was told to go and contribute to Woodhall Primary in Northern Clarendon.

"It was specific, what to do, when to do it, and the school in question," Depass said.

Depass said the instructions she received in the vision was clear.

"'It's 150 students in Woodhall, you need to take care of these students, and you need to do it now'," she related

"When I woke up, I was in tears. I didn't know what it was because the vision was so real. I called my daughter, who is very spiritual, and I told her this just happened to me and what does this mean, and she told me, mom, this is a vision that's outlined to you, and this is a deed you must carry out."

Depass said she got the vision in June and by August she decided to host a back-to-school fair for the students of Woodhall Primary. She used her own funds as well as contributions from friends.

After she told her co-workers about the project, they held a Jamaica Day fundraiser as well as other initiatives to purchase the backpacks. In addition to the tokens, Depass presented 10 students with scholarships valued at $10,000 each.

A past student of St Hugh's High School, Depass, whose husband has ties to Woodhall, said she has always placed a high value on education. She has bigger plans for Woodhall, which includes giving the school a major facelift.

Principal Elisa Craig thanked Depass for her involvement with the school. She also urged parents to invest in their children's education.

"Parents, this is not to spend on hairstyles and children, it's not money for ice cream and phonecards, spend wisely," Craig said.