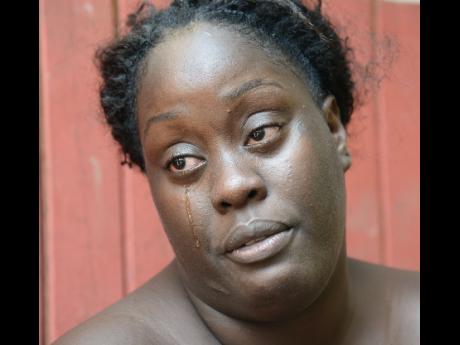 Sasha Gay Hylton is now shedding tears of joy as her missing daughter was found.

After crying for four days and nights since her daughter Jullisa Reid disappeared, Sasha Gay Hylton could finally breathe a massive sigh of relief as her 13-year-old was found yesterday.

Hylton recounted how she broke down when she got the call from the Constant Spring police that her daughter was found at a house in Grant's Pen along with the other missing teenager.

"I feel good to know that she is alive and I am one of the lucky ones to have reported a missing child and got her back in good hands," she said, while thanking everyone who had encouraging words on social media, and the police.

Hylton said she never gave up hope that her daughter would return home safely.

"I am telling every other mother don't give up or think the worst because I never gave up, I never think the worst and somewhere deep down, I think that God was in the midst and I prayed daily," Hylton told THE STAR.

Hylton said she got a call from Jane*, the woman who had claimed to have accommodated the youngsters at her home last Friday night.

Hylton said Jane* told her that she got a tip that Jullisa was in Grant's Pen and they could meet to go and get her. But Hylton said she preferred to seek the assistance of the police.

Hylton believes that Jane, who had contacted THE STAR on Monday, lied about accommodating the youngsters after seeing them on the street, as her daughter claimed that she went to the home willingly because her friend was in a relationship with Jane's brother.

"When they went to her friend's boyfriend's house, they said they didn't want anybody to get into trouble and she was still afraid to come home because she see a day gone and a night and she was scared to come home. However, last night (Monday night) she saw a video with me crying and she decided that she need to come home," Hylton said.

She said her daughter left that premises with her friend and went to Grant's Pen, where her daughter's friend allegedly has another boyfriend.

Meanwhile, Jane confirmed that she went with the police and soldiers to locate the girls on Tuesday, after she received a tip on their whereabouts.

However, when asked if she knew about the relationship between one of the girls and her brother, Jane said her brother did not share the same address as her.

When pressed, Jane said she was instructed by the police not to share any information with THE STAR until she saw them (police) face to face.