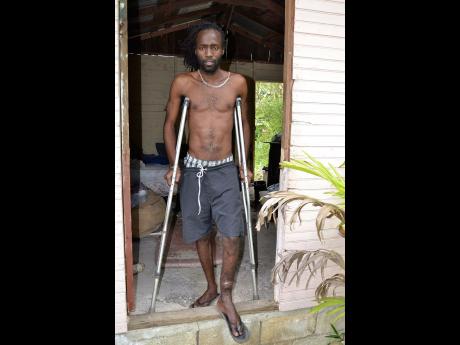 Things are slowly getter better for Omar Martin, a resident of Cornel district in Jack's River, St Mary after the 2016 accident that left him with a broken left leg.

Martin suffered the injury during a domestic dispute in Westmoreland, where he was employed at the time. He said that he had to jump from a three-storey building to save his life, snapping his leg in the process.

In an interview with THE STAR in April 5 this year, Martin said that after two years, his leg had still not healed, and he appealed for assistance to do a follow-up surgery to help correct the situation.

In May, Martin underwent surgery at the St Ann's Bay Regional Hospital, and he has since made several visits to the hospital for follow-up treatment and observation.

"Mi feel good, man! Mi feel 100 per cent to see how far mi come from," Martin told THE WEEKEND STAR. "Them tell mi fi stop use di crutch, so mi a walk without it. It nuh so stressing, jus a likkle pain in mi ankle. True the ankle no use fi a while, it wi pain mi."

He added: "Things a come on slowly. Mi foot naw go look like how it normally look. It neva straighten how mi expect, so it look a likkle deform and it about two inches short."

Martin said that he will have to make an adjustment to his left shoes, adding a couple inches to it, in order to rectify this.

Martin expressed gratitude to THE STAR for highlighting his situation, which he said brought awareness and assistance to his cause.