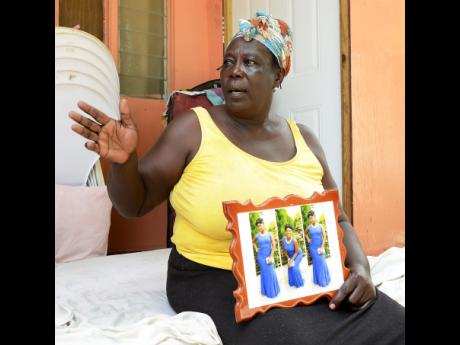 Judith Burke holds a picture of her daughter who was murdered by gunmen in Farm, Clarendon, in October 2017.

Lacia 'Wendy' Mantock was one of the most sought-after hairdressers in her Effortville community. In addition to that, she was best known for her warm and engaging personality.

However, those who knew and loved her best are now living with memories as the 30-year-old died from a stray bullet when thugs went up against each other in October 2017.

Her mother, Judith Burke, is still overcome with grief as she relates the deadly incident that claimed the life of her 'wash belly'.

"I was sitting same place here when I hear some shots, and mi grandson come and say to mi say is right where him play ball dem a fire. Mi start call mi next son because him did pick up a stray bullet before, but him never did a answer. Mi call Wendy phone, but she never answer either," she said.

Effortville, more commonly known as 'Farm', is one of the toughest communities in Clarendon. But, according to Burke, she never once imagined that her daughter would be a victim of gang-related warfare.

As she continued to recall the events of that dreadful Sunday evening, the grieving mother said she called another man, who told her that several persons, including his six-year-old child, received gunshot wounds.

"All this time mi nah think about Wendy being in danger, but mi keep on a ask about Noel just because mi know he was shot before. But everyone keep on a say they never saw him. I then decided to walk to the area where the shots were firing to see if I see him. On mi way there, mi hear say a girl get shot and dead, but mi never know who it was. Shortly afterwards, someone tell mi say Wendy get shot, and is like mi don't know myself. But I just remember praying that God spare her life," she said.

Sadly, Wendy, a mother of two, received a gunshot wound to her upper body and was pronounced dead at hospital.

Staring at her daughter's photograph as she sat with one of her grandchildren on her veranda, Burke said that she has not rested well since her passing.

"Mi other son died suddenly just three years before she dead. Wendy was a good person, and is not just because she a did my daughter, but ask anyone in the community, and them will tell you the same ting. Mi daughter just pick up a stray bullet and dead so. Mi will never get over this," she said.

"Sometimes her likkle son ask mi some questions, and mi can't answer dem cause when him ask why him madda have to die, what mi must tell him?" she added between sighs.