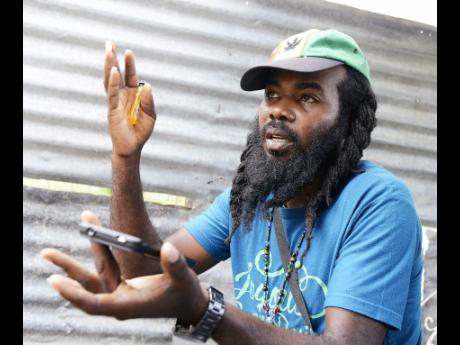 Kayon Morris tells how he was shot by gunmen posing as police in Farm, Clarendon, years ago. 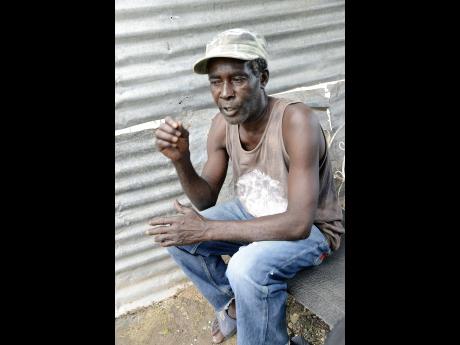 Delroy Lennon reflects on the night he was hit by a gunman's bullet while standing halfway inside his house in Farm, Clarendon.
1
2

Kayon Morris sits in a yard staring at the spot where he almost lost his life after gunmen sprayed him with bullets in August 2015.

"This shooting has affected me financially, mentally, and sometimes physiologically. This is not something that I can hide from, and it makes me angry sometimes. All I can ask is why me because I am no wrongdoer," Morris said.

Morris resides in Farm, a war-prone community in central Clarendon. The craft vendor/musician said he was on his way to a wake with two other men in the community when they were approached by five men dressed in police uniforms.

"Them crank up dem gun and say,' Don't move', but the two men that was travelling with me ran off, and it triggered me to run as well. I got shot three times - one in my crotch, my back and leg," he said.

Morris had to do a major operation, and his road to recovery saw him racking up a hospital bill of more than $1 million.

The father of two said he was unable to work for months and still feels the effects from the bullets, two of which are still lodged inside his body.

Morris is just one of several persons in Farm who have been impacted by the ongoing gang war.

Delroy Lennon told CENTRAL STAR that four days after he buried his wife, he and his stepson were both shot as they stood in their doorway in 2016.

"Mi hear some foot a run come down the road and bare shot a run behind the foot dem. Next thing I feel is something lick mi in my right leg and a sting mi. The shot then fly through mi and lodge in my stepson leg and lodge in it, and mi a tell you say that bwoy suffer a lot after that," he said.

Lennon said the doctors were uncertain if his stepson would walk again but, after a few months, he was playing football.

"Every time when mi think bout how a stray bullet could take our lives, mi blood run cold. Mi would dead leave all a mi kids who a depend on mi for survival. Mi just wa see Farm become a safe place again. Mi wa know say the children dem can play and we na fret for them," he said.

Like Lennon, Morris said he is praying for a crime free community and implores parents to pay closer attention to their children.

"Parents need to start taking up their children in hand. We can't keep raising criminals. My heart is broken when I look at what is going on in Farm. The music that the kids are listening is also playing a major role in what's happening today. Entertainers need to understand that they have a role to play too. Jamaica, we need to stand up and fight against all a this hostility," he said.