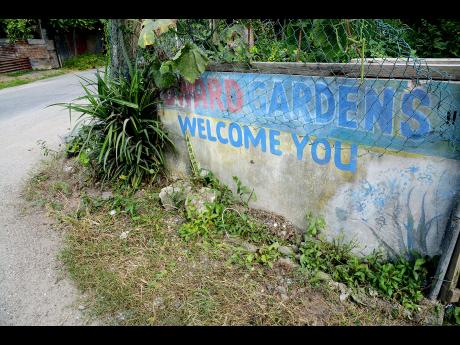 The welcome sign in Bedward Gardens is unkempt and partially hidden by shrubs. Travelling by foot is tedious, and a ride into that section of August Town is quite bumpy. Sections of the road are barely asphalted, and the potholes are large enough to break a leg.

But according to one resident, the road is just a small fraction of their problems. A bigger issue, he said, is the malfunctioning street lights.

"All duppy stop walk a night round here so cause dem fraid a di dark. Some a the place dem dark bad, man. The street light dem have a mind of dem own. Sometimes them turn on, and another time, dem just flicker or nuh come on at all," he said.

Bedward Gardens is a haven for criminal activities, and according to the residents, the lack of working street lights makes it easier for gunmen to go about unnoticed.

"Mi would really waah see the place look nice fi di Christmas. Nuff a the people dem round here a try because one time a the entire place used to zinc up, but that is being replaced with concrete walls now. I think Bedward Gardens can shine again if we unite, but right now, it come like a nuh everyone want that," he said.

The resident also claims that the roads in the informal settlement have never been paved, but he is hoping his community will get a facelift.

The St Andrew community was named after Alexander Bedward, founder of Bedwardism. Bedward was also one of the most successful preachers of Jamaican Revivalism. Bedward was arrested for sedition and sent to a mental asylum. After being released, he continued his role as a Revival healer and preacher.