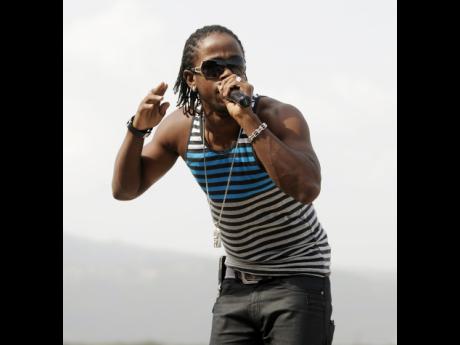 Representatives of dancehall artiste Kalado believe he will not face sanction after police confirmed that the guns he was pictured with are fake.

According to a member of his camp, the Spanish Town Criminal Investigative Branch (CIB) made checks and realised the 'weapons' were not real.

The Corporate Communications Unit of the Jamaica Constabulary Force confirmed this report.

A photo of the entertainer, given name Eton Gordon, sitting behind a desk with the 'weapons' in front of him, quickly circulated around the Internet and social media.

A representative told The STAR that the artiste was shooting a video for one of his songs when someone saw the props and called the police.

"In the video, he has something that was similar to a firearm. They (the police) took him in and were questioning him," he said.

He was optimistic Kalado would be freed in short order because, according to him, there was no offence.

"It was just something for the video and things are under investigation, so basically they are going to free him," the representative said.

While not wanting to comment on the particular situation, attorney Peter Champagnie said that whether or not a person can be charged with having an imitation firearm depends on the specific circumstance.

"Generally speaking, if someone has an item that is not a firearm but looks like one, if it is not used to commit a crime, then I don't see any basis in law for any charges to be brought under those circumstances," he said.