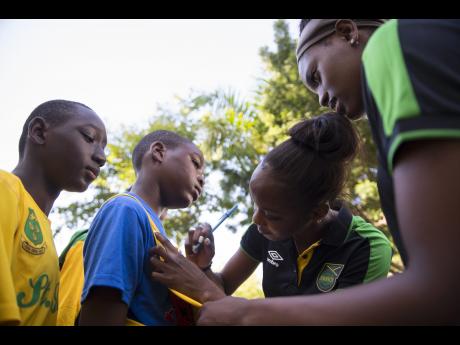 Kawayne Kelly (left) looks on as his St Jago teammate, Dante Porter (second left), gets his jersey signed by Reggae Girlz midfielder Sashana Campbell (third left). Looking on is Reggae Girlz captain Konya Plummer. The Girlz were, on the weekend, treated to a series of events held to acknowledge their historic FIFA Women's World Cup qualification.

Jamaica Producers (JP) Group is now offering bananas to schools across the island at a highly reduced cost of $5 per pound.
This initiative forms part of JP St Mary Heritage Project, which was launched last Friday at the company’s farm in Annotto Bay, St Mary.
Agriculture Minister Audley Shaw applauded the JP Group for launching the initiative. He also said the Heritage Project is a step in the right direction and is in line with the Government’s mandate of encouraging healthier eating habits on school compounds.
“Five dollars a pound for banana, which is more nutritious than imported flour, is an opportunity schools should embrace for our children.  This is a wonderful project, and for a company that has been here for 90 years, I am proud of the leadership that you are providing in this country,” the Minister said.

The Tourism Product Development Company (TPDCo) has been facilitating several product enhancement, business development and training programmes and initiatives to further boost the craft industry and diversify Jamaica’s tourism offerings.
“An important part of the tourism offering is craft, as it contributes to the diversity of the tourism product, demonstrates the colourfulness of our people and allows our visitors to take a piece of our culture with them,” said TPDCo Executive Director, Dr Andrew Spencer.
He notes that the agency has been spearheading skills training sessions and workshops, hosting various activities to showcase and sell authentic Jamaican products made by the artisans.
Plans are afoot for the establishment of a craft development institute and artisan villages in some of the resort areas.

On the matter of the artisan villages, Dr Spencer indicates that five such villages are to be established in several of the island’s resort areas.

The first is slated to be opened mid-2019, at Hampden Wharf in Falmouth, Trelawny.

Government Senator, Matthew Samuda, is assuring that there will be no unfair advantages for manufacturers and distributors under the impending January 1, 2019, single-use plastic ban.

“The plastic ban will be implemented through a Ministerial Order under the Trade Act of Jamaica. There won’t be unfair advantages for any business group in Jamaica, whether large or small,” Samuda emphasised.
He informed that under the Trade Act, plastic bags 24x24 inches, plastic drinking straws, and imported expanded polystyrene will not be allowed for manufacture, distribution and importation by any Jamaican company.
Samuda pointed out that breaches of the plastic ban could result in fines of up to $2 million or imprisonment for a maximum of two years, as outlined in Sections 11 and 13 of the Trade Act.
He noted that no tax incentives or concessions will be administered by the Government under the plastic ban.

More jobs are coming in the Business Process Outsourcing (BPO) sector.  Senator Don Wehby, chairman of JAMPRO, said more than 32,500 persons are currently employed in the rapidly growing area of the economy.

“This industry is growing so fast that we have to ensure that we have the people that are properly trained to meet the demand, because we are projecting at JAMPRO, 11,000 new jobs a year in the BPO industry,” he said.

Wehby, who was speaking in Parliament on Friday, said JAMPRO continues to secure investments for the country across various sectors.

“Up to June of this year, we have booked foreign direct investments (FDI) at US$166.7 million, while export sales stood at US$407.3 million, and the work doesn’t stop there,”  he said.

Gayle to get multi-purpose community centre

Ground has been broken for the rehabilitation and expansion of the Gayle multi-purpose community centre in Western St. Mary.

Cabinet, in September, approved the award of an $85.1 million contract to Marshall Construction Company Limited to undertake the works, which will focus on renovation of the ground floor of the centre to house a police post, renovated courthouse, conference and office areas, and a computer room.  The works will be undertaken over six months. Other segments of the project will include an open auditorium that will be used for cultural and other community activities.

Robert Montague, member of parliament for Wester St. Mary, said that the “entire community is happy for the centre.”

The nation’s 36th KFC outlet was opend in Falmouth, Trelawny on Friday. The restaurant was opened at Champion Plaza, which is located at Market Street.

"We heard Falmouth's call over the years and have responded with a new location,” said Mark Myers, the managing director of Restaurants of Jamaica which has the KFC franchise.

“We are committed to supporting western communities through employment, support of local vendors and distributors. This new opening has provided employment for 50 persons,” added Myers.

Falmouth’s mayor, Councillor Collen Gager, said the opening of the KFC outlet is "a significant development in the hub of commercial activities in this town, which is prime for growth”.

“Already we are in discussions with the company to help support projects here in Falmouth. As soon as the logistics can be worked out, they will be involved in the feeding of the street people here in our town,” he said.