Cops tell consumers to be on the lookout for counterfeit goods 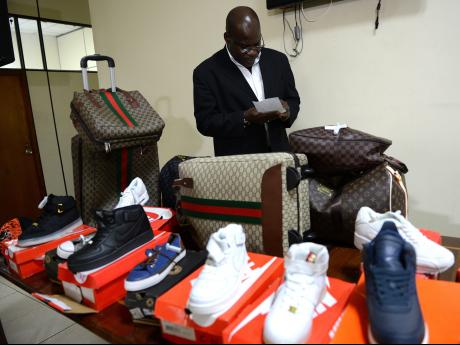 In this file December 2017 photo, head of the Counter-Terrorism and Organised Crime Investigation Branch, ACP Fitz Bailey looks at counterfeit goods that were seized by the police.

Although the police have seized and destroyed more than $1 billion worth of counterfeit items, this has hardly created a dent in illicit trade.

This is according to Assistant Commissioner of Police Fitz Bailey, head of the Counter-Terrorism and Organised Crime Investigation Branch (C-TOC), who, on Monday, seized more than 1,000 counterfeit items, valued at approximately $9 million, during an operation on Mark Lane in downtown Kingston.

Speaking with THE STAR yesterday, Bailey advised consumers to be on the lookout for these items when making purchases.

"Most of the items were seized in the Corporate Area. I would not say the seizure has caused a major dent because there is still a lot of counterfeit products in Jamaica. All I would advise customers to do is to be very careful when they are purchasing items," Bailey said.

The items seized include footwear and sports apparel resembling popular brands such Nike, Converse, Adidas and Puma. They were seized at about 12:10 p.m.

However, the senior cop was quick to note that the illegal trade is a big problem across the globe.

"Some consumers are aware because some of these counterfeiters sell their products very low, but sometimes they sell them for the original price also, so it wouldn't really cause any doubt of the consumer that the items they are buying are fake. It's always good to buy your goods from reputable suppliers," Bailey said.