Cops clamp down on Palisadoes blockers 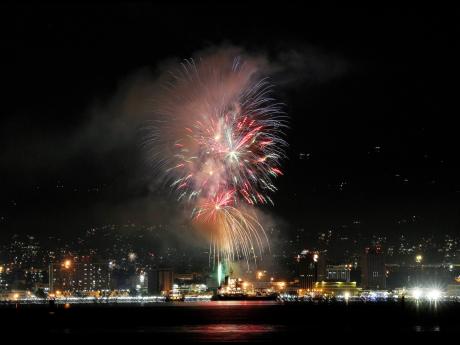 A view of the annual New Year's Eve fireworks from the Palisadoes strip on December 31,2017.

If you are thinking about watching the fireworks on the Waterfront from the Palisadoes road, you may want to think twice about making that trip. The police, pointing to traffic congestion on the road leading to the Norman Manley International Airport, say they will be clamping down on vending and unauthorised parking along the strip.

"I am patrolling to ensure that no one is setting up anything. So for those who want to carry dem jerk pan, we will have none of it," Superintendent Victor Hamilton, head of the Kingston East police, said.

The Palisadoes road has become popular for persons to converge in order to behold the spectacle of fireworks being set off on the Kingston Waterfront at midnight to welcome the new year. Hamilton said that the growing number of persons converging on the strip has impacted the smooth flow of traffic to and from the airport.

The zero-tolerance approach being taken by the police also comes against the background of the New Year's Day debacle this year, which saw persons missing their flights because of a major traffic jam on the road, which was caused by patrons attending the Sandz party that was being held at The 7th Harbour Beach Park.

Hamilton said the Sandz debacle may have highlighted the traffic flow issue, but it is not the only contributing factor for this year's change.

"We can't allow disorder so that persons who want to go to the airport or others who use the strip have difficulty getting to where they need to be," he said.

Meanwhile, the Norman Manley International Airports Limited(NMIAL), operators of the NMIA, has expressed confidence that the corridor leading to the airport would "remain traversable for the benefit of those using the airport".

"NMIAL is also in dialogue with the Jamaica Constabulary Force (JCF) regarding the management of traffic along this corridor and anticipates a smooth flow and pleasant experience for both new year celebrants and airport commuters alike," the operators said.