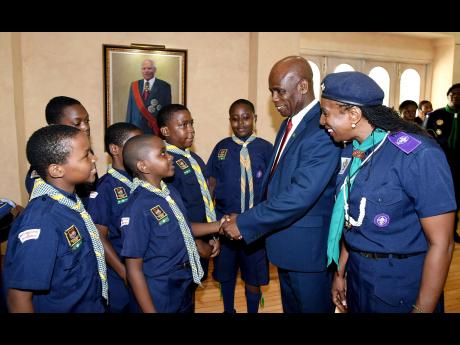 Deputy Governor-General, Steadman Fuller (second right), interacts with members of the Scout Association of Jamaica, while Assistant Chief Commissioner of the Association in charge of Cubs, Karen Harriott Wilson looks on. Occasion was the recent launch of Caribbean Cuboree 2019, at King's House.

The 2019 National Leadership Prayer Breakfast will be held on Thursday at The Jamaica Pegasus hotel.

The theme for this year's breakfast is 'I Pledge'. This was inspired by Dr John C Keane's book I Promise in which he took an in-depth look at Jamaica's national pledge and was passionate about the role it could play in nation-building. The committee strongly believes, as postulated by Dr Keane in his book, that the national pledge can be used as a catalyst for renewal. The National Leadership Prayer Breakfast's focus this year is therefore to challenge our national leadership in Government, the judiciary, business and Church, as well as ordinary citizens, to make a pledge: a pledge for integrity, justice, unity, peace, productivity, and goodwill to all.

Cub Scouts and their leaders will be attending the 15th Caribbean Cuboree in Ocho Rios, St Ann, from July 30 to August 5.

The event will be held at the Ocho Rios High School, Ocho Rios Primary School, and St John's Preparatory School, where 600 locals, aged seven to 11, will be joined by 600 youngsters from the Caribbean, China, Australia, and Canada, for wide-ranging activities designed to shape their development.

Assistant chief commissioner at the Scout Association of Jamaica in charge of Cubs, Karen Harriott Wilson, says the event provides the youngsters with the opportunity for cultural exchange, where the participants learn new skills, adding that significant efforts are being made to afford children from inner-city and rural communities the opprtunity to attend.

The event is being held under the theme 'Cuboree A Universe of Fun'.

Education Minister Senator Ruel Reid, has noted the importance of the education sector to the development of the country.

He says that the nation's teachers have a role to play in creating avenues for opportunities to help students self-actualise and develop their talents.

He was addressing students and staff at the Grange Hill High School in Westmoreland during a recent visit to the institution.

Reid lauded the principal and academic staff of Grange Hill High for playing an active role in transforming the lives of the nation's students.

Reid, along with top officials from Region Four of the Ministry of Education visited the Little London, Grange Hill and Petersfield high schools in Westmoreland, where he met with teachers to discuss issues facing the institutions.

The curfew imposed in the Kingston Western Division in accordance with the Law Reform (Zones of Special Operations) Special Security and Community Development Measures Act has been extended.

The curfew began on 6 p.m. on Sunday, January 13, and will remain in effect until 6 a.m. on Wednesday, January 16. The boundaries of the curfew are as follows:

NORTH: Along Race Course Lane (Blount Street) from the intersection of Little King Street travelling to the fence line forming the western periphery of the Golden Heights Housing Development; also annexing the northern and eastern sections of said development, travelling south along the paved gully and continuing to the intersection of Williams Street and Upper Rose Lane.

During the hours of the curfew, all persons within its boundaries are required to remain within their premises unless otherwise authorised in writing by the ground commander.