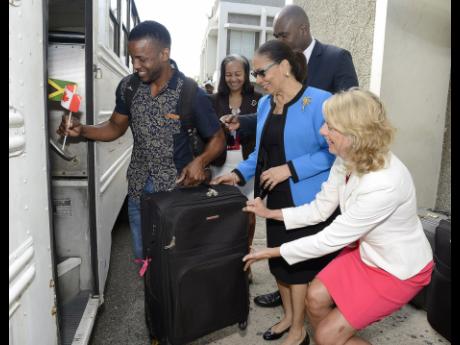 Jermaine Wilson (left) is assisted with his bag to get on the bus to depart for the Canadian Farm Work Programme by Laurie Peters (right), high commissioner of Canada to Jamaica, Shahine Robinson (second right), minister of labour and social security and Xavier Mayne, minister of state in the ministry. The farm workers departed on January 3. 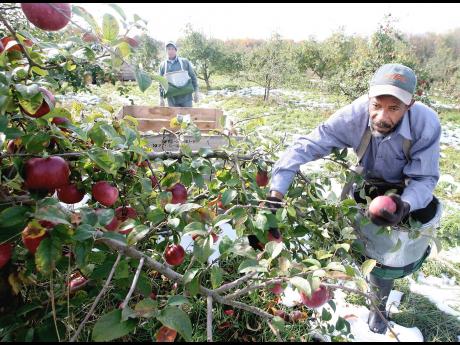 The decision to be separated from his heavily pregnant girlfriend for eight months is not an easy task for first-time farm worker Jermaine Wilson.

This is further compounded by the fact that he will not be present for the birth of his first child later this month.

But Wilson believes that by entering into a job in Canada, he will be in a better position to take care of his family back home.

Wilson is among a batch of close to 300 Jamaicans who have taken up employment opportunities in Canada under the Seasonal Agricultural Workers Programme (SAWP).

"My girlfriend should have the baby about January 23, and I am not going to be here. But it's the best for us, so I have to go and do my best and provide for them and see to it that they are all right and all is well," he said during a send-off ceremony at the labour ministry's Overseas Employment Services Centre in downtown Kingston recently.

Wilson, who is slated to return to the island when his child will be eight months old, is grateful for the opportunity that has been provided through SAWP.

He says that advancements in technology will allow him to communicate with his family members on a regular basis and that he eagerly awaits photographs of his young child.

Most of the seasonal agricultural workers will be employed in Ontario in areas such as Leamington, Tilsonburg, Bradford, Simcoe, Milton, Strathroy and Goderich. They departed the island on January 3 and 4. The SAWP, part of the ministry's Overseas Employment Programme, has steadily provided employment opportunities for Jamaican workers since 1966.

Describing the programme as a "blessing", experienced worker Howard Anderson encourages first-time participants to use their goals and aspirations as reminders of why they are on the programme.

"It is going to be challenging for the first time, and sometimes you feel like you want to quit, but just put your mind on the goal and what you plan to achieve. The first week is the challenge, but from you get over the first week, 'you good'," he said.

Expressing appreciation for the opportunities the initiative has afforded him thus far, Ian Underhill, who will be working in Leamington, urged participants to be honest and hard-working.

"I thank God for it because it help me to take care of my children and school my children; because when I was growing up, my parents never have it to help me in school so much, and I come now and got the opportunity to help my children. I thank God for all seven of them ... they have qualification now that can help them," he said.