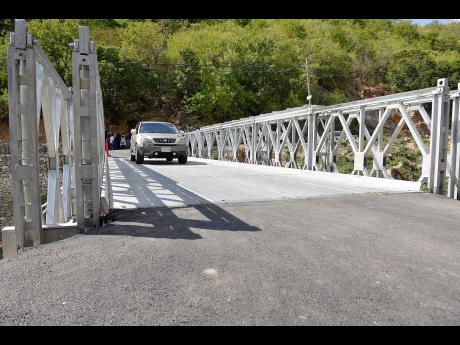 A motorist drives across the new bridge that was officially opened on Monday in the Taylor Land community of East Rural St Andrew by Member of Parliament Juliet Holness.

More than 6,000 residents in the Taylor Land community of East Rural St Andrew now have easier access to their homes, following the opening of a bridge in the area on Monday.

Speaking at the official opening, Member of Parliament for the area Juliet Holness said the new infrastructure has brought relief for users of the roadway as, previously they had to travel longer to enter the community.

Holness noted that without the bridge, it is very hard to secure the community, as the added distance meant that the police could not respond timely to situations.

Holness also lauded the community members for their cooperation during the construction, and for ensuring that there was no undue delay or additional cost.

Meanwhile, Director of Technical Services at the National Works Agency (NWA), Roger Smith, told the gathering that the new bridge replaced the previous one that had served the area for more than 45 years.

He said the bridge was the first of several that the NWA bought from China recently, and that they are being deployed at "designated sites" across the island to be installed at a cost of $100 million.

Bridges will also be erected at Chesterfield and Barracks in St Mary, and Southwood, in Clarendon.

The Land Administration and Management Programme (LAMP) has been merged with the National Land Agency (NLA).

Effective Monday, matters were being processed from 8 Ardenne Road, Kingston 10.

The merger is in keeping with the Government's Public Sector Rationalisation Programme, which seeks to streamline the services offered by public bodies through mergers, closures, privatisation or reintegration into the public sector. The LAMP-NLA merger came with a transitional period, to end in April of this year.

The National Water Commission is advising that operations at the Kensington Pumping Station in Portland are scheduled to be disrupted from Thursday, January 17 to Friday, January 18.

This is in order to facilitate the relocation of a transmission pipeline.

Customers in the Kensington community will be without their regular water supply during the two-day operation and are being encouraged to store water for use.

Court of Appeal to have historic setting

For the first time in the country's history, all three divisions of the Court of Appeal will sit for the initial week of the new court term to hear matters.

The increased capacity of the court is a result of the appointment of three additional judges of Appeal.

In his remarks during the first sitting of the appellate court for the Hilary term on Monday, Court of Appeal President Justice C. Dennis Morrison revealed that there would be two simultaneous sittings of Judges in Chamber on Tuesdays. This means, two single judges will each sit in chamber court every Tuesday afternoon for the remainder of the Hilary term.

Following this week's sitting of the three divisions of the court, only two divisions will sit for the remainder of the term. This will allow the other judges to focus on writing judgments.