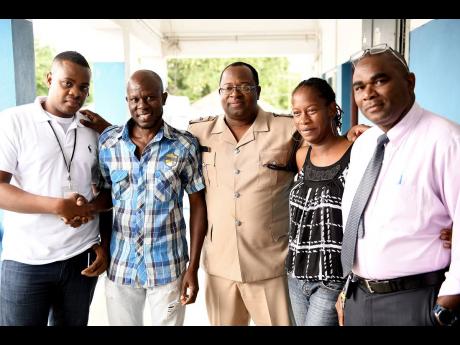 As Suzett Whyte and Sinclair Hutton get set to reunite with their baby Sae'breon today, exactly one month since he was stolen from the Victoria Jubilee Hospital, investigators have signalled their intent to expand their probe.

THE WEEKEND STAR has learnt that documents presented by the woman, who tried to register the baby as her own on Tuesday, have been taken into evidence, as detectives seek to uncover if there is an active child stealing ring in Jamaica.

The woman remains in police custody pending further questioning and an identification parade.

Head of the Kingston West police, Superintendent Howard Chambers, told THE WEEKEND STAR: "We want to look broad if there is a possible baby-stealing ring in Jamaica. This thing really opened a can of worms. We are going to collect more statements."

Our news team understands that several persons who gave statements to the police will be called upon again for further questioning.

According to investigators, the woman had documents to support her claim that she was Sae'breon's mother.

Crime Chief for the Kingston West Police Division, Inspector Phillip Dodd, said: "Some documents that we found her with, we are checking some locations where these documents came from. She had some passbooks and documents speaking to registration and visitation at clinics signed by persons purporting to be medical persons."

The police say that other persons may be involved.

Hutton told THE WEEKEND STAR that he is convinced the suspect did not act alone.

Hutton said: "Me woulda say a more than one person. A nuh must she took the baby, because a from fourth floor. So she have to pass security post one and come downstairs at the main gate, so more people involved."

Meanwhile, Whyte, Hutton and other relatives, who showed up at the Denham Town Police Station yesterday, were beaming with joy as the news broke that DNA tests conducted on the baby proved it was indeed theirs.

Hutton said: "When I got the news I started screaming and say yes!!! Dem tell me say the DNA match. I feel great, greater than great."

Whyte said she is holding much of her comments until she is reunited with her baby, which is expected later today.