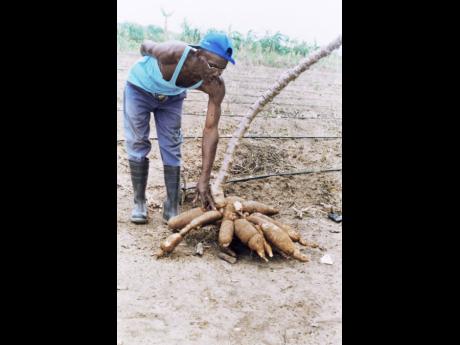 A leading cassava factory in western Jamaica says it is being starved of the key starch which is used to produced its popular bammies.

The factory, which is run by the Flower Hill Producers Co-operative Society Limited in St James, is known for the production of Western Bammies. However, its operators say they have been experiencing cassava supply challenges in recent years due to a decrease in the number of cassava farmers, as well as the introduction of major players in the trade.

"We have a big challenge because since Red Stripe came in and started to buy cassava, and people find out say cassava have a lot of health benefits, we have a challenge getting cassava to make the bammy," manager of the co-operative, Edna Edwards, told the Western Star.

Cassava starch is being used as a replacement for imported barley in the production of beer. Red Stripe has an ambitious target to increase its use of locally sourced raw materials, especially cassava starch, to 40 per cent by 2020.

"We usually go to St Elizabeth, Trelawny, Westmoreland and Hanover to buy the cassava and encourage farmers to plant and so forth. However, over time, some of them get old and can't manage. Some died, and the younger generation not going into farming," she added.

"Through that, the little who remain is hiving his to the bigger companies. What some of them are doing is planting cassava for Red Stripe."

She outlined that in order to make up for the shortage, the co-operative resorted to planting its own. However, it has proven somewhat difficult due to financial constraints affecting production.

"We have 13 staff members here now from the Flower Hill community, but we use to have 18 members. Due to the challenges with cassava, some gone to find other work because here so can't really maintain their family," said Edwards.