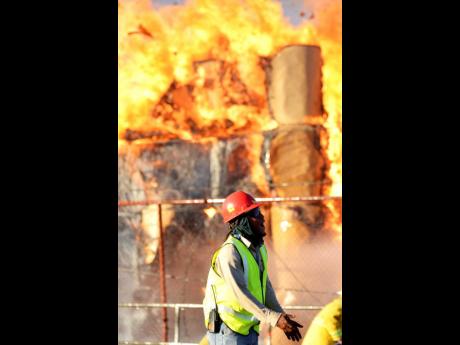 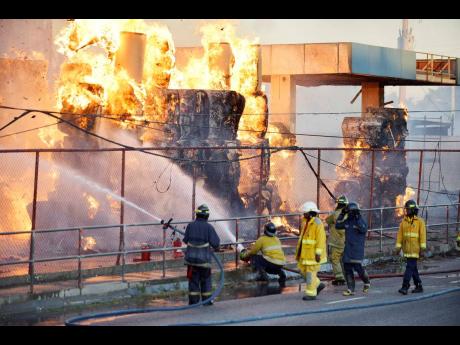 Firefighters battle the blaze near Jamaica Packaging Industries on Marcus Garvey Drive yesterday. Traffic came to a standstill as onlookers and motorists stopped to view the massive blaze. The company’s warehouse and main production area were not damaged.
1
2

Residents of Greenwich Farm are counting their blessings that their homes were not affected by yesterday’s massive fire along Marcus Garvey Drive.

Residents of Second Avenue said they worked quickly to try and get the fire under control before the firefighters came on the scene, but their efforts were useless because they did not have enough water.

“We tried to out it, but wi see it a get outta proportion, suh wi haffi just leave it. Mi guh put down the baby, and run guh call bay people, cuz all house wudda bun dung. Di mount a water wi haffi throw. But wi neva have enough,” said one resident, who said she was the first to notice the fire.

Responding to questions posed by THE STAR, Senior Jamaica Fire Brigade Deputy Superintendent for Fire Prevention and Public Relations Officer, Emeleo Ebanks, said the brigade got the call at 3:34 p.m. He said six units and two water trucks from Petrojam attended to the blaze.

“For a fire of this magnitude and nature, containment and control were done in excellent time,” he said.

Though there are no reports of residences being affected, material owned by the nearby Jamaica Packaging Industries (JPI) was destroyed.

Speaking with THE STAR last night in the aftermath of the blaze, Roberts-Williams said production would continue.

“Our main paper area, that was not impacted. We not going to have any production tomorrow (today). Most likely we’ll restart operation on Wednesday. But our operation, our production plant, our warehouse are fine,” she said.

It is alleged that the blaze started after garbage was being burned in the back of a truck. Heavy wind carried sparks to an old gas station where JPI stores some of its paper; the sparks then set those rolls on fire.

Roberts-Williams told the STAR that the gas station contained 25 to 30 per cent of the company’s paper.

She also praised staff for trying to ensure the blaze did not consume all of their inventory.