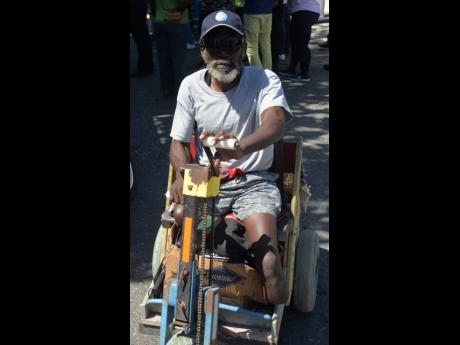 Oswald Davis in his three-wheel cart.

Oswald Davis, 63, a self-taught mason of Falmouth Gardens in Trelawny, believes that the hard times he is facing are an act of witchcraft sent from the dark world.

He said that obeah forced doctors to amputate both his legs.

Davis has had to resort to a locally manufactured three-wheel cart to get around.

He said that sometime in 2002, an evil spirit was set upon him through a pair of his shoes that he had left outside to dry.

"Fi tell you the truth, some people throw obeah powder in a mi boot and it gwaan until it reaches dah way yah," Davis told WESTERN STAR. "I washed my shoes and left it outside on the zinc top to dry and when mi pick it up and wear it, I not realising that the powder the people them use to obeah me was on my shoes until afterward."

Davis shared that since that day, he has had to spend all his life savings seeking medical advice before the legs were amputated.

"So mi go put my foot in there and for 11 months straight, mi feeling pain night and day. It started to rotten and stink from inside and then seeking medical attention, the only alternative was to cut it off because it could not come back," he said.

He said that he lost his right leg in 2002, and, in 2007, the left leg developed similar problems and also had to be amputated.

Despite his problems, Davis is grateful to be alive but wants help to keep him active so that he can continue to use his hands to make a living, moving around on his cart to do odd jobs.

"I would like to get a bicycle engine that can move around better. I have not been able to work the way I used to for more than 17 years. From the foot start give worries, me don't do nuh work more than little hustling," Davis said.