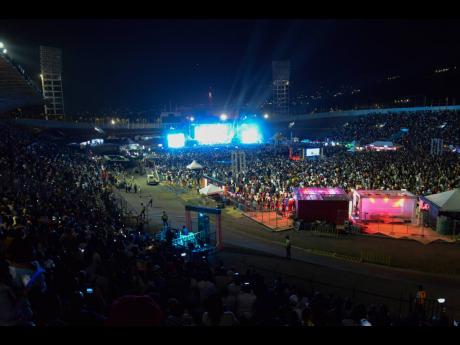 The view from the bleachers section of the Long Walk to Freedom concert, held at the National Stadium last Saturday.

The organisers of the highly anticipated event repeatedly said that no tickets would be sold at the venue.

But for some patrons, ‘luck’, as they put it, was on their side.

One such patron told THE STAR that she watched the event for only $1,500.

“I took my chances, and while we were there outside the stadium, people were going around with tickets and they appeared legit and it got me and my team in. Four of us got dem from a guy. We watched the show and the show was great,” she told THE STAR.

Our news team gathered that tickets were allegedly being sold at the National Heroes Circle, where some patrons went to utilise the park and shuttle service provided for the show.

One of the scalpers, Frank*, says it has been a while since they profited from an event at the National Stadium.

When asked where he got the tickets, he said: “Can’t tell you that and stop mi food. All mi know a di fastest I mek $15,000. Mussi inna three hours. Trust me, big up Buju Banton. People dem love di Gargamel. Mi did have all VIP and sell it fi $5,000.”

Frank, who resides in East Kingston, told THE STAR that the business of selling tickets at stadium events was dying. However, things are looking up.

He said: “When the event hot, you nuh have hand fi sell ticket like Saturday. See all Champs a come up; more time a dem time deh alone we eat a likkle food. Stadium hot again suh we nuh mind. From you have your link and you want eat a food, money can mek.”

He believes that event organisers were too busy counting profits to be concerned with a small loss.

“Look how much people lock out of Champs last year. Stadium can only hold ‘X’ and dem print ‘Y’, so that mean overselling gwan, and when the stadium full, dem just lock out people. We deh ya last year and see it. Champs a next week, so watch how it a go go,” he said.

There has been no public statement from the organisers of the Buju concert relating to illegal ticket sales.

Attempts to get a comment from head of the Fraud Squad, Deputy Superintendent Albert Dia, proved futile. Repeated calls to his cell phone went unanswered.

The Corporate Communications Unit also told THE STAR that there have been no reports relating to fraudulent ticket sales.