Capleton is now a free man 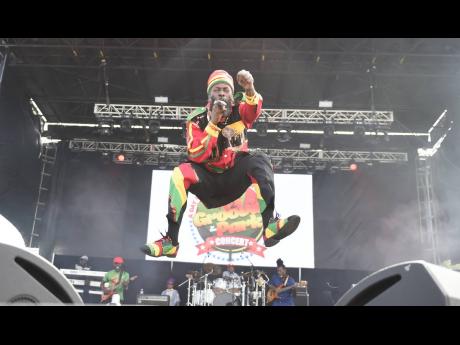 Entertainer Clifton 'Capleton' Bailey was freed of rape charges yesterday in the Kingston and St Andrew Parish Court after the matter was dismissed.

His attorney, Christopher Townsend, told THE STAR that there was no evidence to substantiate the claims made by the complainant.

"The judge took into account the evidence to see if the accused should stand trial. There would have been no evidence to substantiate the allegations against Capleton. A no prima facie case has been made out against him, and he was set free," Townsend told THE STAR.

Now that the matter has been dismissed, Capleton is said to be in good spirits.

"He is extremely happy because his career has been affected. My client had difficulties getting certain visas to travel because this case was hanging over. He is very grateful that justice has prevailed, having always maintained his innocence. He is also grateful for the persons who stood with him," Townsend said.

Capleton's team said they will celebrate the occasion by hosting a children's treat in St Mary on his 52nd birthday, on April 13.

Claudette Kemp, Capleton's manager, said: "Victory. Capleton is free. No lying lips shall stand before the Almighty. Touch not the Lord's anointed. I spent the longest day in court, from 10 a.m. to 3 p.m. Capleton is sleeping. He did not rest last night (Tuesday) because this thing has taken a toll on him."

Kemp also told our news team that Capleton has lost a lot of earnings during the case.

"Have lost so much money from last year May until now. He was supposed to kick off his tour with Rototom Sunsplash in August, but the promoters couldn't book him because of this court thing. After a while, Capleton just stopped taking new overseas bookings," Kemp said.

"The man nuh go nowhere go groom nuh locks. From the day this thing started, the accuser has never turned up to court, and the policewoman has showed up on one occasion only," she said.

Capleton was arrested and charged on May 11.

The police say the woman, who is a hairdresser, reported that she was hired by the 51-year-old entertainer and went to a hotel in New Kingston on April 28 to groom his hair.

According to the police, she claimed that while there, he held her down and had sexual intercourse with her against her will.

The woman made a report to the police on May 2.