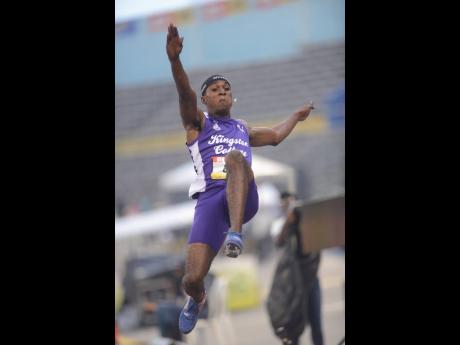 Wayne Pinnock of Kingston College setting a new Boys’ Champs record of 8.05 metres in the Class One boys long jump at the National Stadium yesterday.

KINGSTON College's long jumper Wayne Pinnock was the star on yesterday's second day of competition at the ISSA/GraceKennedy Boys and Girls' Championships inside the National Stadium. Pinnock, who was always expected to do great things in the event, produced a brilliant record leap in the Class One boys. The defending champion broke the old mark on his second attempt with a leap of 7.95 metres. It erased the 26-year-old record of 7.87m set by former Vere Technical athlete, Leon Gordon, in 1993. On his third attempt he went even further as he became the first local schoolboy to go over the eight metres barrier after a massive 8.05 metres.

KC are the early leaders among the boys with 27 points after two finals. Calabar High are second on 16 and they are followed by Jamaica College with nine, St Elizabeth Technical (STETHS) six and Wolmer's, five. Rusea's High on 23 points lead the way among the girls ahead of Edwin Allen High 10, STETHS nine, Excelsior High and Wolmer's Girls, seven each.

Pinnock had gone over eight metres twice this season, but was denied by an over the limit wind reading on both occasions. Yesterday, he made his intentions clear from very early after a 7.78m mark on his first effort. KC captured the first two places. Shaquille Lowe overcame his early struggles to get up to 7.61m on his fifth attempt to grab second.

Earlier, Calabar High's Class Two long jumpers had sent the defending champions into the lead with a one-two finish in their event. Jordan Turner improved on last year's second-place finish to take the event with 7.46m . His teammate, Luke Brown, who was lying in seventh place used his final jump to grab second with 7.45m. KC's Jaheim Cox took third with 7.17m.

In the Class One discus, Rusea's High's Shamella Donaldson won with 59.70m. Adrienne Adams of Excelsior was second with 47.32m and Marie Forbes of Vere Technical was third with 46.94m.

Yesterday also saw the preliminary rounds of the 400m and all eyes were on defending champion Christopher Taylor of Calabar in the Class One heats. Taylor appeared to be in some distress in his 200m heat on Tuesday but ran conservatively to win his 400m heat in 48.40 seconds to advance to the semi-finals with the seventh best time. His teammate, Evaldo Whitehorne, was impressive in winning his heat in 47.31 to be the fastest qualifier. Wolmer's Boys' Jeremy Farr (47.68) was next best ahead of Holmwood Technical's Bovel McPherson, 48.02.

In Class Three, Ferncourt's Derek Grant was fastest with 51.10, ahead of Shadane Smith of Calabar, 52.18 and Dashawn Gordon of Charlemont High, both clocking 52.18.

Holmwood dominated, 400m qualifiers among the girls. Rickiana Russell, the Class Three defending champion, was fastest in 56.81. Her teammate Daniella Deer, the Class Two defending champion, was best in 55.61 seconds, ahead of Hydel High's Garriel Whyte 55.98. In Class One, Keva Francis was the fastest qualifier best with 54.61, ahead of teammate Danielle Brissette, 54.87.