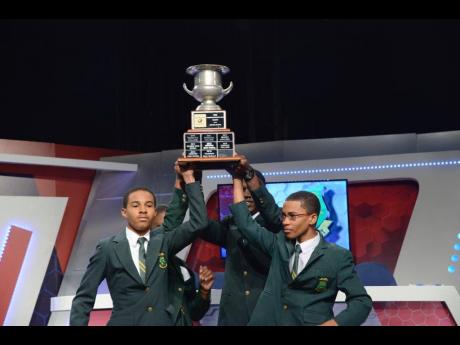 Their opponents might have been eyeing a unique three titles within a school year, but St Jago High School had its own number in mind, 275.

That is the number of years the Spanish Town-based institution, formerly known as Beckford & Smith, has been in existence.

And with the landmark anniversary being celebrated all year, a fifth Schools' Challenge Quiz title was the perfect gift.

The team from Monk Street dominated the famed 'Purples' of Kingston College (KC) last night to win the fierce battle 39 to 19.

St Jago's victory was a spanner in the works of the KC machine, as the North Street giants attempted the elusive 'triple crown' in high school sports and academics.

KC ended a 32-year drought to take the Manning Cup in 2018, and recaptured the Boys' Champs title after 10 years last Saturday.

Last night, however, on the 50th anniversary of the quiz, it was the team from St Jago that stood taller.

The school's motto " Labor Omnia Vinciti", which means "Labour conquers all things", was definitely on show as they toiled their way to victory.

Mark Clark, coach of St Jago, said that he accredited the team's win to hard work and preparation.

KC led the opening round by eight points to seven for St Jago.

That was, however, short-lived, as St Jago clawed their way back to the front after the speed section to lead Kingston College 29 to 25.

The exciting buzzer section was a delight.

Both St Jago and KC incorrectly answered the first question of the final section, setting things up for a nervous finish.

St Jago tallied 10 points, while KC, at the end, were unsuccessful in attaining any points in the final section.