110 and counting - Supercentenarian celebrates birthday with friends and family 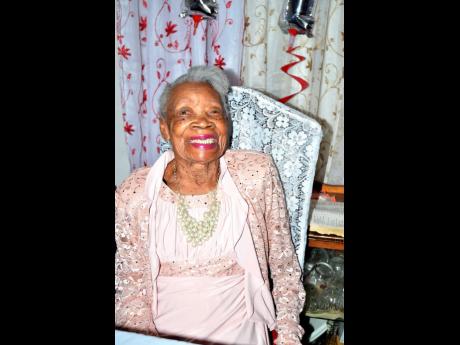 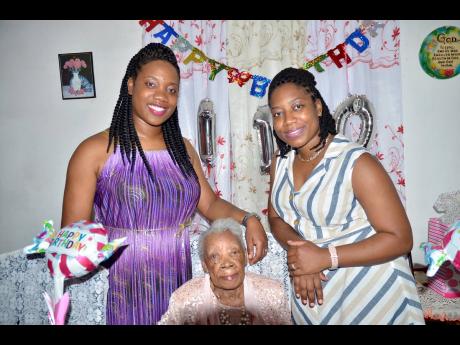 Eslin Mulgrave Collins (centre) is flanked by two of her grandchildren, Naidia James Delgado (left) and Daicia James Walker at her birthday celebration. 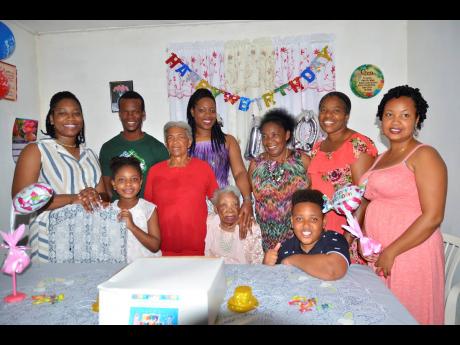 Family members share a light moment with supercentenarian Eslin Mulgrave-Collins on her birthday. 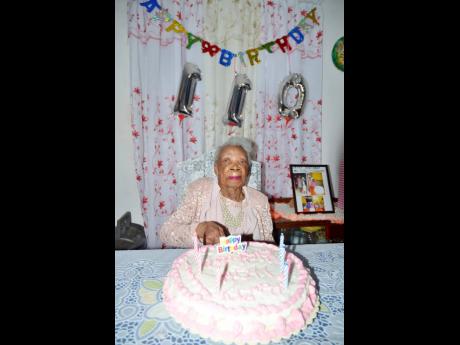 Eslin Mulgrave-Collins, the supercentenarian of Mt Horeb in south St James, celebrated her 110th birthday on April 2 with family and friends even as rain pelted the roof of her home.

Mulgrave-Collins’ cheerful smile and strong voice, despite her feeble frame, amazed some of her grand and great-grandchildren who journeyed from the United States to celebrate the special moment with her.

Born 1909, Mulgrave-Collins is the only surviving child for her mother. She followed in her mother’s footsteps by giving birth to seven children. However, only six of her children are alive to see her age gracefully.

“Today, I am all of 110 years old, and I am giving thanks to God for his favour,” said Mulgrave-Collins, who is a life member of the Mt Horeb United Presbyterian Church.

She said she loves the Lord, but because of her feeble frame, she has not been able to travel to church as she did in her younger years.

“A long time I stop go to church. Mi don’t have the strength and the energy to walk anymore,” she said.

Aside from the favour God has granted her in terms of good health and strength, she said that the food she continues to eat has been a contributing factor to her long life.

THE STAR also learnt that processed and canned foods were never part of her daily diet.

According to Daicia James-Walker, one of Mulgrave-Collins’ 32 grandchildren, her grandmother has been a widow for more than 40 years. Prior to her limited mobility, James-Walker said that Mulgrave-Collins enjoyed tending to her backyard garden, doing crochet, and drawing until she was about 90 years old.

“What she enjoys now is reading her bible. My grandmother is still able to recite nursery rhymes and poems she learned from her basic school days, and she is always giving an encouraging word to those who visit with her,” James-Walker said.

“She is still cognately intact and alert, just a slight hearing impediment and the loss of a leg, which was amputated shortly after celebrating her 108th birthday.”