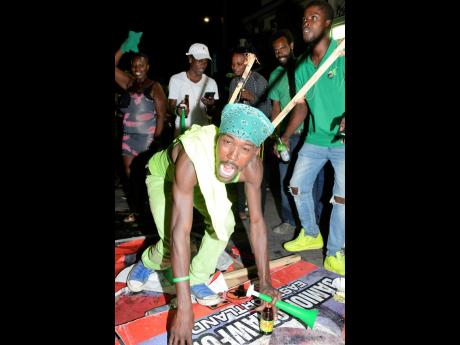 A JLP supporter mimics a goat, as he and others jeered losing PNP candidate Damion Crawford’s campaign promise. The supporters were gathered last night in Port Antonio to celebrate the victory of Ann-Marie Vaz in the Portland Eastern seat. 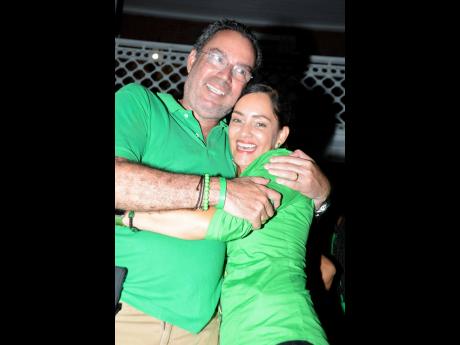 Some Jamaica Labour Party (JLP) supporters in Eastern Portland, who rallied last night in Port Antonio square in celebration of their soon-to-be Member of Parliament Ann-Marie Vaz, said they would be feasting today on nothing but curried goat.

The defeated People's National Party candidate Damion Crawford had told voters that if he won the seat, he would issue goats to the constituents.

The goats, however, according to several persons gathered at the victory rally, were not for improving lives, but for 'mekking belly buss'.

Damion Ennis told THE WEEKEND STAR: "We nuh want nuh goat. If him did win and u did get the goat, it wouldn't deh here, it woulda gone a town. 'Action Ann' (the moniker Vaz adopted for the campaign) is here and we a go nyam di goat."

The sentiment was shared by many and may even have been the deciding factor.

A woman said, "Bout goat. Right now the goat deh a Junction (main road) ya now a go back a town."

Vaz won the by-election for the seat, tallying 9917 to Crawford's 9611 in the preliminary count.

Some persons tied a rope around campaign billboards of Crawford and walked through the crowd, as if they were farmers carrying out their herd.

'We nuh need no goat'

That supporter told THE WEEKEND STAR that the boat reference was for his dad who is a fisherman.

A green clad, self-proclaimed Rastafarian told our news team, "Mi tell dem say a di woman a go win and a she me vote for. We nuh want no goat. Goat can dead, man a Rasta, a livity me deal wid."

The seat became vacant after the murder of the sitting Member of Parliament, Dr Lynvale Bloomfield.