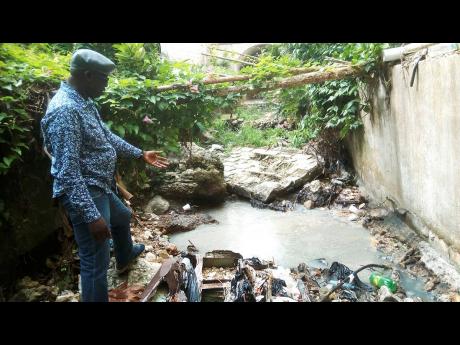 The community of Hopewell in Hanover is now being invaded by rats, and this is believed to be as a result of the unhealthy behaviour of residents and business operators, who are constantly dumping garbage in the main gully.

The situation is now so bad that some health-conscious residents are now worried that the stagnant water, piles of garbage, mosquitoes coming from the gully and the hundreds of giant rats roaming the area could create health challenges.

"Several community members, including children, who reside in the area surrounding the gully, have taken ill recently, and we strongly believe that their illnesses came about from the unsanitary condition of this gully, especially with the rats," said Jeffery Brown, a concerned resident.

"In a time when the Ministry of Health is warning Jamaicans about so many different types of flu and other sicknesses, we are here sitting on a time bomb in Hopewell."

When THE WESTERN STAR spoke with Cleveland Wright, the president of the Hanover Parish Development Committee (HPDC), he said that the matter has been brought to the attention of the Hanover Municipal Corporation and the Hanover Health Department.

"We at the PDC have sent several letters to them (both organisations). We have even contacted Devon Brown, the councillor of Hopewell Division. But, to date, we have not received any positive attention," said Wright. "With all these rats, the stagnant water, the garbage and mosquitoes, this could create serious problems for the community."

Craig Oates, the enforcement and compliance manager at the Hanover Municipal Corporation, told THE WESTERN STAR that the management of the municipality is aware of the situation and is now formulating a plan to address the situation.

"We are aware of the situation, and we have been doing everything that we can to address that problem," said Oates. "The rat infestation has taken place because business operators have been using the gully as a dumping ground for waste water and garbage."

Oates said that the corporation has put wardens in the area to monitor the situation.

"But most of the dumping takes place at nights when they are off duty," added Oates. "We need the full support from the National Solid Waste Management Authority and the Hanover Health Department to fix the situation."

Efforts by THE WESTERN STAR to make contact with the Hanover Health Department were unsuccessful, as their telephone rang without anyone answering.