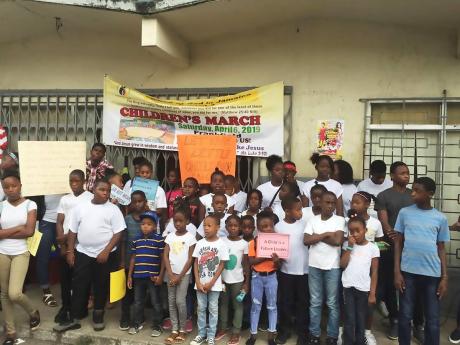 Some of the participants in the march on Sunday.

On Sunday, not even the threat of rain could stop the members of the Church of God in Jamaica from walking through the streets of Frankfield in Clarendon to make a statement against child abuse.

In an interview with Dianne Johnson Peccoo, one of the organisers of the march, she said that the event is an annual one.

Marching under the 2019 theme 'Stop Hurting Us', Peccoo said Jamaica's children have been hurting and the march wanted to emphasise that.

Co-organiser Audrey Porter DaCosta, told CENTRAL STAR that any movement which speaks to Jesus as the only source of hope, prosperity, and peace is what she wants to be a part of.

"We believe that we are called on in this generation to be agents of change, to be the voice of hope, the voice of wisdom and the voice of direction for all groups, especially the vulnerable; and the children are no exception," she said.

DaCosta said that human depravity of all kinds has often moved her to tears, especially what children are exposed to in Jamaica.

"What it has aroused in me is a desire to do something about it; we continue to be the voice of hope," she said.

In a fiery message, Pastor Limahl Hamilton charged parents to stop hurting their children and instead show them love, values, and morals, and to teach them to be respectful citizens.

"That is what is lacking in our community. We are calling each and everyone back to the place where we care for each other in love," he said. He also hits out against taxi men who lure young girls with money to violate them.