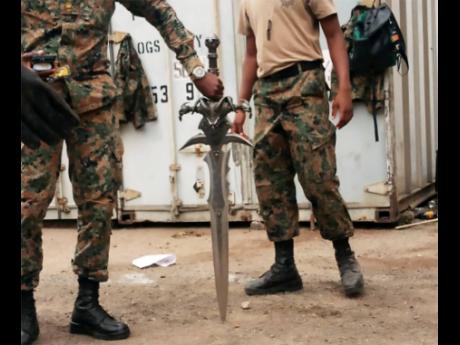 No actions will be taken against the Jamaica Defence Force (JDF) soldiers who were seen posing beside a sword that social media users have labelled as the Sword of Baphomet.

"They did not violate any rules at all," Major Basil Jarrett, civil/military cooperation officer at the JDF, said.

Jarrett said that the weapon was not found during an excavation exercise, as is being widely rumoured.

"The interpretation that persons have on social media has made things look way more than they are, but these soldiers will not be penalised as they did nothing wrong," he said.

Major Jarrett said that the weapon was intercepted by customs officials and seized some years ago. He said that as is the case when Customs seize certain objects, the sword was sent to the JDF for storage.

It is unclear why the sword was being imported, but Jarrett said it may have been intended to be used as a prop in a production.

Since the discovery of the weapon, which resembles a baphomet sword, several persons have been suggesting that members of the JDF may be involved in witchcraft. Baphomet is associated with the worship of Satan.

However, Jarrett said that the army is merely storing the sword.

"We are doing inspections and a container was opened up, and it was taken out," Jarrett said.