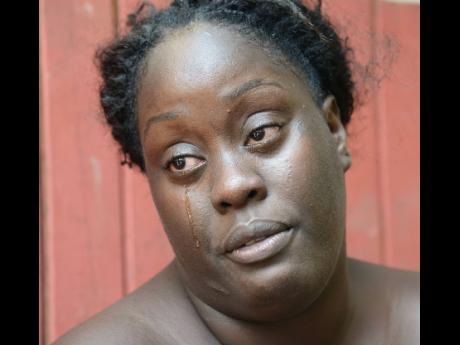 When Sasha Gay Hylton got the news that Shante Skyers' body was found in a sink hole in the Red Hills area, she immediately broke down in tears.

Hylton is the mother of Jullisa Reid, who was reported missing last year but was found alive.

Hylton had been tracking Shante's story and had even shared her photos on her Facebook page multiple times.

Hylton said that she is in disbelief that someone would want to hurt a little child.

"Mi nah tell no lie, it come een like me stomach drop out. It is bringing tears to my eyes. Mi share so much post for her. Mi can just imagine how her mother feel right now. A weh the poor child do now for someone to do that to her?" she said crying.

She told THE STAR that more needs to be done to ensure that children are safe.

She suggested that the Government collaborate with schools to bring in a shuttle bus system, so that children who live far way from school, can be transported home safely, especially if it is getting late.

She added that parents need to be their brothers' keeper and ensure that children, especially the girls, go home when it is getting dark.

"The Government needs to finds these persons, they need to start hang them, they need to get rid of these persons. The police nah do nothing. Every time a child go missing, a the parents them a do all a the work, because when my daughter did missing, a mi follow up every lead. Teachers gone home when school done and nuh see to it that the children go home off the street. The big people dem fi do the same. Mi remember when mi did likkle, people send mi home, because some men out there they are very perverted and them mind dirty. People need to get involved in these children's lives," she said.

She implored the police to do more, as there are times that children are kidnapped by people close to the family.

In the same breath, she is pleading with teenage girls to behave themselves and stop running away, as they may prevent others who need the help from getting it.

"Nuff a them, including my daughter, run weh and have them parents pan social media a look for them, while children like poor likkle Shante inna trouble. If someone could have heard her cry, probably she would be alive today," she cried. "Dem pickey yah need fi get punish when they run way because kids are out there missing and dying and dey inna human trafficking. When you share a image of a girl missing between the ages of 14 and 18, people a comment a seh: 'Likkle girl gwan home', when some a them missing fi true and by time them get help, them dead already."