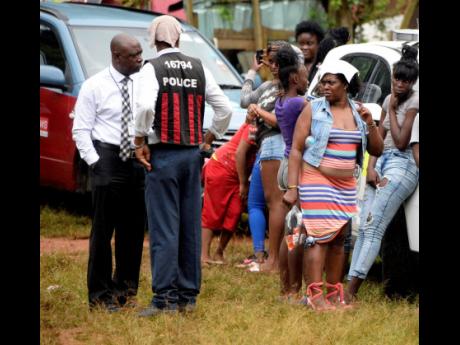 Onlookers gather at the scene where Shante Skyers’s body was found in bushes near her home in Sterling Castle Heights, Red Hills, yesterday. 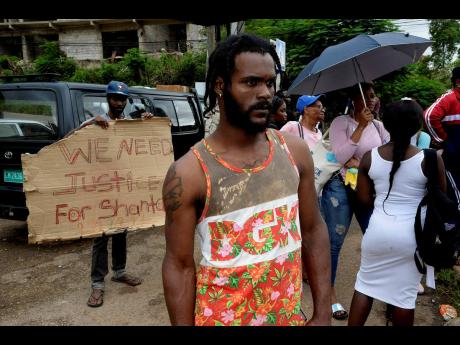 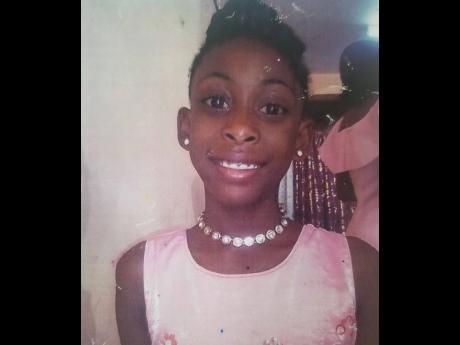 The five-day search for missing seven-year-old Shante Skyers ended yesterday in a section of Sterling Castle Heights, known as Blue Hole, where her decomposing body was found partially hidden by garbage.

Screams of anguish echoed through the community from the youngster's grandmother, who had to be whisked away from the scene by a family member.

The atmosphere was extremely gloomy as the residents converged close to the scene where Shante's body was discovered.

Her parents, Fabian Skyers and Crystal Service, could not contain their grief and also had to be removed from the scene.

In expressing their outrage, they lashed out at the 'silent' child molesters and killers that lived among them, stating that jungle justice is the only suitable punishment responsible for such gruesome act.

"If we eva find out a who do this, we a go kill dem we self. How can someone kill off poor little 'Booksie'? She was a sweet little girl. A the first mi ever see something like this happen in this area; we need to stop accept the stranger dem in the community come live. Right ya now, we nah stop, because the little girl never deserve this. How could a man look at that innocent likkle girl and kill her? It obvious say dem a watch her long time and true the rain a fall dem take her cause no one was outside," a man said angrily.

On Monday, the residents erected road blocks and accused the police of not placing an interest in finding Shante.

Shante's father is also pointing fingers at members of the security forces, saying that his daughter could have been found earlier.

"If we didn't block the road, they would not have been here with dogs and soldiers and police. Why didn't we get this type of urgency before? Probably my baby would have been found alive if more urgency was placed on the matter," he said.

However, Superintendent of Police Leon Clunis said the police had been working assiduously since the child's disappearance, but stated that other teams had been called in to assist the Red Hills Square police.

"We have picked up some leads this morning (yesterday) but it is still too early to tell where those leads will take us. We, however, have had a male in custody since Sunday in relation to a similar incident, so checks are being made to see if there is a connection to this crime. We will be leaving no stone unturned until those responsible for her murder are brought to justice. Based on what we are hearing, it is obvious that the child did not make it out of the track. We will not stop until we remove these types of perpetrators from the community," he said.

Shante's decomposing body was found by members of the security forces after 10:30 a.m. yesterday. Her coach and physical education teacher, Phillip Anderson, said he is heartbroken.

"I have been in this community for decades and I never once imagined that something like this would happen here. Shante was a very good student and she was one of the best in the class three races. Her father was also an athlete and this is the track that he would also take. She didn't walk through anywhere that was unknown to her. I am shocked that she was killed," he said.