Another person held in connection with child’s murder 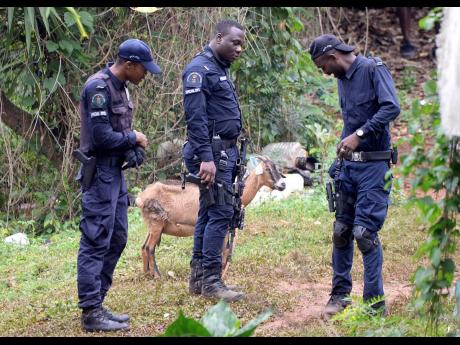 Police secure the area after Shantae Skyers’ body was found in bushes near her house in Sterling Castle Heights, St Andrew, last Tuesday.

Investigators have taken a third man into custody in relation to the murder of eight-year-old Shantae Skyers of Sterling Castle Heights, St Andrew.

This brings to three the number persons now being questioned by investigators.

"One other man is being held in connection to the murder of little Shantae and is being questioned by investigators, while the two men who were taken in last week by the police remain in lock-up," said Assistant Superintendent Dahlia Garrick, head of the police's Corporate Communications Unit (CCU).

Skyers' decomposing body was found last Tuesday among rubble in a section of the community, following a five-day search after she failed to return home from school.

A relative newcomer to the rural community, having moved there only in January, the police strongly believe Skyers was sexually assaulted before being killed by her attacker. A post-mortem is scheduled for today.

In the aftermath of the discovery of the child's body, Miguel Williams, a 26-year-old resident of the community, was attacked, beaten and then set alight by an angry mob, who accused him of having knowledge of what led to Skyers' demise.

Garrick said Williams had not previously been booked for any sex-related offences, adding that investigations are also still ongoing into his death.

"I know that all investigations including both deaths are being carried out in earnest," Garrick said.

THE STAR was told that up to the time of Williams' death that no information was shared with the police to indicate that he was suspected by residents to have been involved in the child's murder.