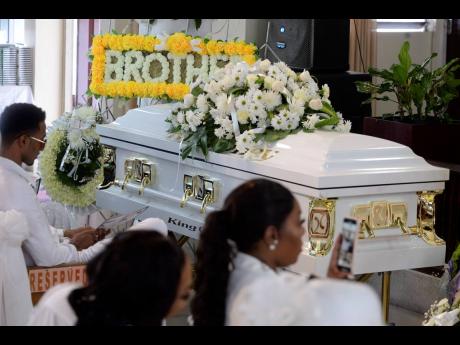 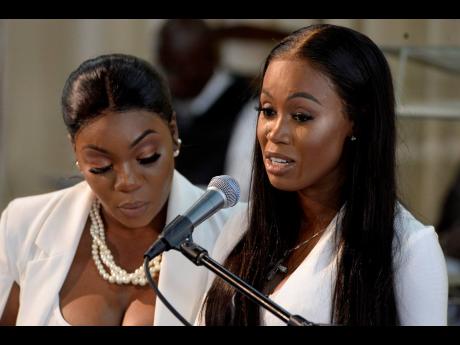 Coralee Osborne, Oney British’s fiancé, is comforted by a family member while delivering a tribute during yesterday’s funeral at the Tarrant Bapist Church. 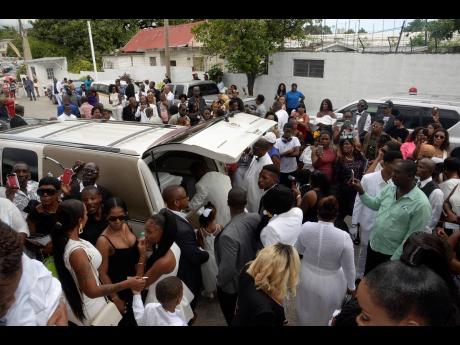 The funeral for Oney British was a high-fashion affair.
1
2
3

Several skimpily dressed female mourners who attended the funeral for Alfonso ‘Oney British’ Harriott were ushered out the church because of the revealing nature of their attire.

Hundreds of mourners packed into the Tarant Baptist Church located at 51 Molynes Road in St Andrew to celebrate the life of the businessman.

The high-fashion affair, which lasted more than two hours, was not without incidents. For instance, Pastor Lexi Uricka, who was listed on the funeral programme as friend of the deceased, took several mourners to the task during the proceedings.

“She cannot come in the church like that ... Ladies cover up your chest when you step in the church. Please!,” she said.

An usher was visibly upset at the sight of the scantily clothed women in the church. “She couldn’t pass me come in here, you mussi crazy!”

Harriot, 56, was the father of 11 children, was shot and killed while travelling in his Mercedes Benz motor car near the National Stadium in Kingston on March 29. His death came days after his close friend, Roy Fowl, who was murdered in February, was laid to rest.

During the service for ‘Oney’ or ‘King Oney’ or ‘Mr H’ as he is affectionately called, was remembered as a successful businessman, good father and a great friend.

“He was such a principled man who believed in loyalty to the end,” his fiancé, Coralee Osborne, said

Accordingly, Osborne said Oney British’s final words to her were, “Mi love you enuh babes, I’ve never loved another woman like you.”

Craig Currie was too overcome with emotions to read the eulogy. His wife did the honours. Oney was remembered as a man who started out as the owner of a stall at the Pearnell Charles Arcade in downtown Kingston. He blossomed into a very successful entrepreneur.

“... Oney created jobs for 15,000 men and women. He is one of the most accomplished businessman in Jamaica... He is one of Jamaica’s true humanitarian... he owned the best and he wore the best ... he was a man loved by the women, as evident in his many children,” the eulogy read.

However, officiating minister Reverend Jeffrey Shuttleworth, in delivering his sermon, pointed to a question which Jesus posed when he walked the Earth.

“What can it profit a man to gain the world and lose his soul? Any life lived outside of Jesus Christ cannot be a full life.”

To lose one’s soul is to die without a right relationship with Christ.