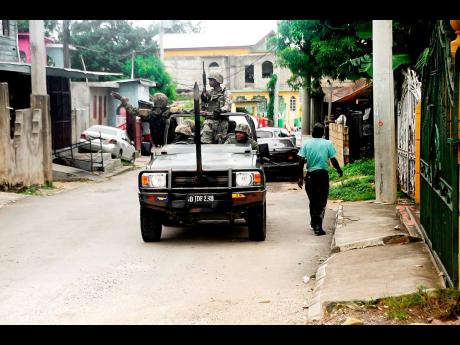 The security forces on the ground during early stages of the state of public emergency in St James, last year.

Dozens of western Jamaica residents say they welcome the decision made by Prime Minister Andrew Holness to call for a state of public emergency.

Garfield Wright, a pushcart vendor who operates out of the Charles Gordon Market in Montego Bay, told THE STAR that calling a state of emergency was the best thing to do.

“Everywhere wi tun a pure murder, and the man them heart a get wicked and wicked. Even down a the market a pure criminal down deh; as them si yu a mek a money them want rob yuh,” he said.

According to Wright, gunmen are rampant in the inner city and every day it seems as if there is another murder.

Over in Hanover, residents also shared the same opinion that calling for a state of emergency to help fight crime was a good move by the PM.

Delores Chambers, a dressmaker of Green Island, said that Hanover has got out of hand, and it is full time the Government take charge of criminals.

Other residents in the parish say they want to see a greater presence of the soldiers.

The residents say they are just asking the joint military forces to act within the law when it comes to persons’ rights.