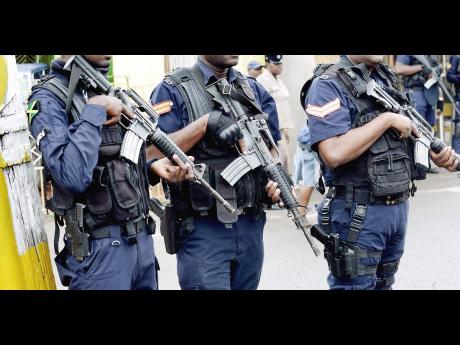 The Mobile Reserve, a robust operational unit within the Jamaica Constabulary Force (JCF), is to be disbanded and its head, Senior Superintendent of Police Terence Bent, has been sent on leave to facilitate an investigation into the unit.

This was among a range of major changes announced by National Security Minister Dr Horace Chang yesterday.

The announcement came in the aftermath of Sunday morning's bizarre incident in sections of St Catherine, which saw three men being killed, including a civilian and an alleged rogue cop.

A high-level probe has been launched by senior investigators attached to the JCF's Criminal Investigation Bureau and the Inspectorate of Constabulary into reports that three policemen, including Williams, were behind the murder of Daley, who was killed at a party in Chedwin Park.

All three are said to be attached to the Mobile Reserve.

Terrence Williams, the commissioner for the Independent Commission of Investigations (INDECOM), in response to news of the likely disbanding of the Mobile Reserve, said in a radio interview on RJR on Thursday that INDECOM had long called for the operations at Mobile Reserve to be looked at with a microscope because of the history of allegations there.

Assistant Commissioner of Police Warren Clarke is to oversee the winding up of the Mobile Reserve and develop a framework for a new entity within the JCF.

Daley's murder set off a chaotic chain of events. It is reported that an off-duty cop witnessed when Daley was shot by armed men, who drove off in a white Nissan AD wagon.

The cop pursued them, and during the chase, according to INDECOM, gunshots were fired from both the white Nissan and the vehicle driven by the off-duty cop.

The white Nissan reportedly collided with a silver Nissan of a similar model at the intersection of Brunswick Avenue and Jobs Lane.

Three other civilians who were in the silver Nissan were seriously injured.

INDECOM said that three of the five firearms recovered from Sunday's shoot-out were police service weapons.

It also recovered two sets of registration plates, a third set was attached to the front and rear of the car; a police vehicle logbook for one set of the plates found inside the car; and a detachable police blue emergency light.

The service vehicle is assigned to the Mobile Reserve.