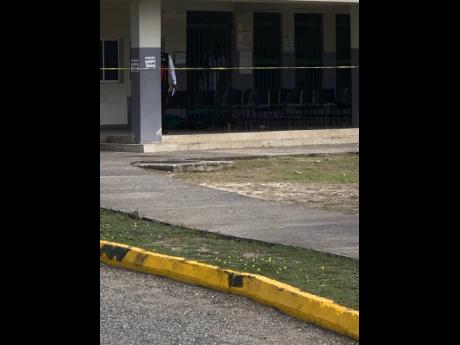 Following the murder of his son yesterday at the hands of a gunman inside the Maxfield Park Comprehensive Clinic, a man known only as 'Baboo' was overcome with grief when he arrived at the scene.

The grieving father had to be restrained by a security guard, as he tried to get past the gate to get a close-up look of his son, who laid motionless on the floor in the clinic's waiting section.

His 19-year-old son has been identified as Rushique 'CoCo' Bailey.

Some onlookers who gathered at the scene told THE STAR that Bailey may have picked up that something was amiss and called for his transportation.

A woman said: "Him see somebody and call his taxi fi come because him can't walk good. The taxi never reach in time."

Our news team understands that Bailey was attacked in his community last Sunday and was being treated for gunshot wounds.

A woman told THE STAR: "Dem shoot him up last week Sunday and him get two shot in a one foot and one inna the other near him ankle, suh a crutches him did a use."

Baboo told our news team that the last time he spoke with his son was during his clinic visit last week.

By this time, news of his death had begun to spread and other relatives who arrived on scene wept openly, decrying his murder.

Several persons who were on the compound to conduct legitimate business had to be evacuated after the brazen shooting.

Reports are that about 9:50 a.m., Bailey was waiting to be attended to when he was approached by a lone gunman who shot him several times.

An eyewitness told THE STAR: "A five shot fired. Him get the first three inside the clinic and him a try run and the shooter go over him and fire two more in him head. Everybody a run up and down."

Our news team was told that close to 100 persons were sent scampering for cover. The clinic was closed after the incident and several workers and patients had to be evacuated.