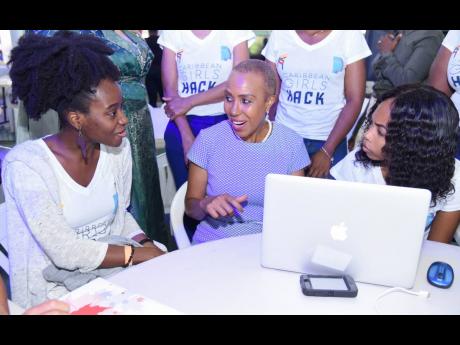 Technology Minister Fayval William is encouraging more female students to get into information technology (IT) and innovation, so that they can be part of the growing industry.

Addressing the opening ceremony for the 2019 Girls Hackathon yesterday at the Chinese Benevolent Association in St Andrew, Williams noted that a 2018 research conducted by her ministry revealed that there is a "significant difference" between males and females, based on enrolment in the Caribbean Secondary Education Certificate (CSEC) for IT.

She also highlighted that a gender disparity of 3:1 (male to female) was discovered at four of the island's tertiary institutions at the undergraduate level (in IT) over the 2013 to 2018 academic years.

She argued that technology is a great enabler and driver of growth, and it is essential that "we have a digitally inclusive society", where both men and women can actively participate and share for the benefit of the nation.

Girls Hackathon is a SheLeadsIT initiative, a Caribbean non-governmental organisation (NGO), which seeks to advance and empower women, with a specific focus on bridging the gender gap in digital skills.

NEPA to engage students and teachers in

The National Environment and Planning Agency (NEPA) will engage primary school students and teachers in the protection of shore and water birds ahead of International Day for Biological Diversity (IDBD) on May 22.

Approximately 70 students from 12 primary schools in the Education Ministry's Region Six will participate at a sensitisation session at the Mount Nebo Primary School and Baptist Church in St Catherine tomorrow.

The school is located within the Rio Cobre Watershed area, which empties into the Kingston Harbour and is a popular site for bird watching.

The session will include a presentation to the students to show them how their solid waste, in particular plastics, impact the marine environment.

The students will also be engaged in bird watching and a variety of games.

As the nation observes Child Month, Government Senator Dr Saphire Longmore is calling on law-abiding citizens to be more protective of children from sexual predators.

During her address in the Senate last Friday, Longmore cited the recent killing of children and emphasised the need for parents and guardians to protect the nation's youth.

She noted that statistics from the Child Protection and Family Services Agency (CPFSA) show that, on average, 10 out of every 1,000 children are subjected to child abuse or maltreatment; 79 per cent of children witness violence in their communities or home; and 68 out of every 100,000 children are victims of a violent crime.

Longmore added that 14 children have been murdered since the start of this year, 83 were raped, 49 were victims of grievous sexual assault, and one committed suicide.

She implored those who have information about the predators that target children to call Crime Stop or contact the police.

The Violence Prevention Alliance (VPA) has launched an INSPIRE Strategy Campaign in 12 schools across the island.

Elizabeth Ward, chair of the VPA, said that the campaign would specifically target the schools that emerged parish champions in its 2018 Trees for Peace Competition.

"These schools will be asked to create a campaign on the INSPIRE Strategy, which is aimed at ending violence against children," she said.

Ward explained that the INSPIRE Strategy, which is an initiative of the World Health Organisation (WHO), identifies a select group of strategies that have shown success in reducing violence against children.

"These strategies include the implementation and enforcement of laws; norms and values; safe environments; parent and caregiver support; income and economic strengthening; response and support services and education and life skills," she explained.

The VPA will work with the selected schools through targeted workshops that will guide them in the development of their respective campaigns.

The workshops will be conducted in St Mary, St Catherine, St James, and Manchester on May 15, 16, 20 and 21, respectively. The four best campaigns will be selected and promoted.

The National Health Fund (NHF) recently reaffirmed its commitment to assist patients with lupus through subsidies for medication, at a function to officially mark the addition of lupus to the NHF's Individual Benefits Programme.

As of April 30, 2019, NHF cardholders have been able to access drugs for lupus at a reduced cost through the NHF's Pharmacy Provider network, of which there are over 415 participating pharmacies across the island.

Dr Desiree Tulloch-Reid, president of the Lupus Foundation of Jamaica (LFJ), said: "Persons with lupus face many challenges, from the condition, its complications, and the challenge with gaining access to the right care and affordable treatment".

"We (LFJ) would like to express congratulations and our appreciation to the leadership and staff of NHF who have made today possible by their efforts," she said.