We can make a difference, too - Youth group helping fire victims to rebuild 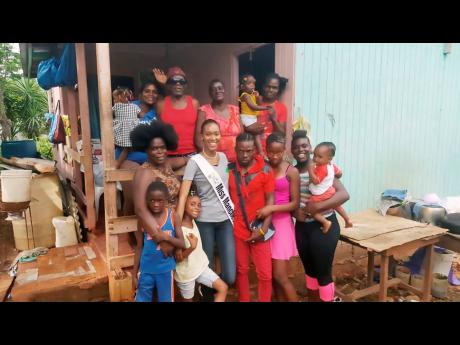 Manchester Festival Queen Crystal Scale (wearing sash) takes a photo with a family after donating a number of items to them recently. The family lost their home in a fire on April 6.

When the members of the charity group AXM heard that Kerene Smith-White lost her house in a fire three weeks after burying her husband, they immediately sprang into action to help her rebuild.

Karl Brown, the vice-president of AXM, said that he quickly got the attention of current Manchester Festival Queen Crystal Scale, who said she was touched by Smith-White's story.

"I got introduced to her through our advisor, and he was saying we should do something for her. I got some items from members of AXM and my family and from my department at NCU (Northern Caribbean University). I spoke to Crystal about the mother's situation, and she decided to come on board. We went down to her (Kerene) mother's house, where she is staying, and she brought us to her home, which was burnt down (on April 6). We gave them food and clothes. We helped her get in touch with Food for the Poor, so now we are waiting on things to be processed," Brown said.

AXM, which stands for Altruist and Monique, was started three years ago. Since then, Brown said that they have been reaching out to people who are in need of help.

"You don't have to be old to get things done. The persons who are part of AXM are between the ages of 15 and 25. People our age can make a difference too," he said.

Scale told THE STAR that she was especially touched by Smith-White's family, as they are sticking together although they are going through a difficult period.

And although her reign ends on June 2, Scale said that she intends to make long-term plans for the family.

"I spoke with the family and got to know them and assess how best I could assist them. I started to reach out to as many persons as I could. Before I went there, I went grocery shopping and got some food and donations of clothing for the family," she said.

"My hope is not just to give them supplies to help them now, but to put them in a place where they can continue to have a source of income."

Smith-White, a mother of six, said that she is grateful for the help, and thanks all the persons who have assisted her.