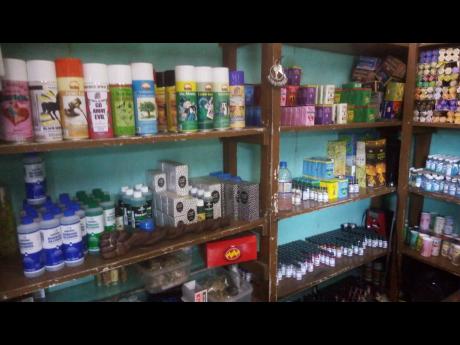 Photos shows the various oils, sprays, herbs and soaps sold in one candle shop in Montego Bay. The operator says these items are here to uplift Jamaicans and not to cause harm.

Following a recent incident in downtown Montego Bay, St James, where a police sergeant detained a female, who, after being searched, was found to be carrying items she purchased at a nearby candle shop, several operators have come forward and endorsed their products, and the practice of obeah.

"We do not sell poison, we do not sell guns, nor do we sell anything to harm persons, so no police should harass persons that come to any candle shop," the operator said. "Candle shop sells spiritual oils, essences and spiritual sprays, and none of these items kill people."

According to her, the candle shop business is committed to helping persons.

"That incident involving the police officer does not often happen in the area. There was a police operation in the area, and the lawmen decided to search the woman. As to her being detained, that was very strange because our customers do not get harassed, and they don't have problems with the police," she said. "The items we sell are used to help persons in a way that no other spiritual movement in Jamaica is able to. Most persons come here when all other things have failed, medical institutions, security institutions, and religious institutions."

She said that people are beginning to realise that obeah is part of Jamaican culture.

"This is the power of our African religion, and what it means to most of the world," she said. "Most Jamaicans are brainwashed that the word obeah means negative and bad. It's really a situation of fear and misunderstanding, and it is very funny; we use the word obeah loosely."