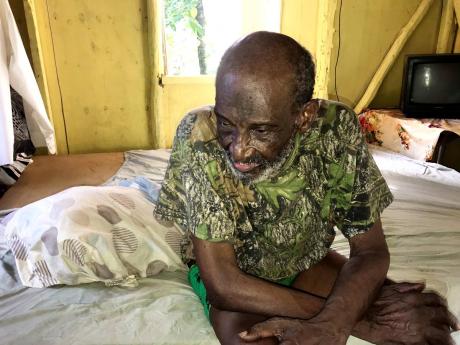 Gladstone Cerease, a former member of the Island Special Constabulary Force (ISCF), has hit tough times. Cerease, who is visually impaired, said he had served the ISCF for more than 30 years. A former corporal, he now lives in a one-room shack in Siloah, St Elizabeth.

"I am asking anyone who is seeing this and can assist me in any way, please do, because I need help," plead Cerease, who sat on his bed with his head hanging.

He told the CENTRAL STAR that during his time in the force he was recognised for "exemplary service". His service in the ISCF ended in the early 1990s, after he was not allowed to re-enlist.

Now 74 years old, Cerease said that he is not getting a pension and is surviving off the goodwill of others.

"If I could see someone to tell me I could get part of my pension, even $10 a week, I would be grateful," he said, before breaking down in tears.

Cerease, who worked in the Siloah area for years, conceded that he was delisted from the force, but he maintains that he served with integrity.

"Mi didn't thief nothing, mi didn't do anything dishonest," he said. "And after a man in a job for so many years, and they honour you for exemplary service, a must good you do," he said.

"I would like to be recognised, whatever it can be that would be helpful to me, because I am in no condition to assist myself now, I am blind," he said.

He told the CENTRAL STAR that he fathered six children with his wife, who is now deceased. He also claimed that his children do not pay him much attention now.

The place where he now lives is privately owned. He has no house for himself as the one that he purchased while he was a serving law-enforcement officer was repossessed by the bank after he defaulted on his mortgage. He said that he was taken to his current location by his daughter, and is now worried that the landowner may evict him someday.

Osmond Muir, who claims he owns the place where Cerease now lives, said he has no intention of removing him.

"He has nobody to please him, so I have to help him," said Muir, offering one of the few glimmer of hopes for the old lawman.

Cerease said a next-door neighbour assists him with food.

"The lady who is helping me now cook for me; is not a family member. It is just God who sent somebody to assist me," he said.

The one-room shack, which is badly in need of repair, along with a bed, food, medication and caregiver are some of his urgent needs.

"I don't have any money to pay anyone, because of that I suffer ... Any help you can get for me, please help me," he begged.