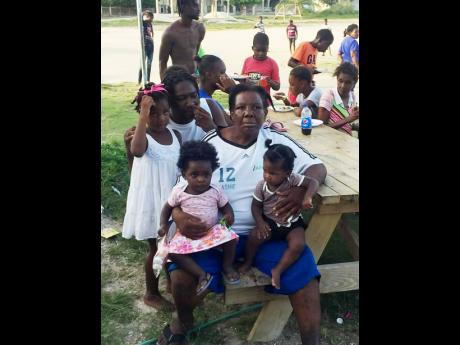 Jennifer Wright with her grandchildren.

A pall of gloom now hangs over the community of Whitehouse in Montego Bay, St James, following the tragic death of 60-year-old Jennifer Wright, a popular fish vendor.

Wright was crushed by a drinks truck last Friday morning.

"My mother a one a the best woman you cud ever find on the face of the Earth," Ryan Samuels, a son of the deceased woman, told THE WESTERN STAR. "Everybody know my mother as 'Girlfriend' or 'Jones' and she was one of the most popular fish vendors in western Jamaica."

He said that everyone in Whitehouse knew her as the 'village mother'.

"Because although a six a wi she have, she adopt, and tek care a ova 20 other children in the community, and is a lady who very jovial, kind, loving, and full of fun," he said. "She will tell yuh off dis minute, and next minute yuh and she a best friends. A just she dat, very plain, and up to now none a wi still don't believe seh shi dead. "

WAITING ON THE TRUCK

Reports are that shortly after 11:30 a.m, Wright, who also sold empty bottles, was waiting on the drinks truck at a bar in the Whitehouse.

The driver had parked some distance away from Wright's crates, so she walked over to the truck.

The driver paid her for the bottles and as Wright was walking back towards the bottles, the driver started to reverse. Wright was run over by the truck, and crushed.

"Mi just help har carry the crate dem go out a the road, and a rush fi come back come watch Jamaica match, when mi hear the noise. Until now mi inna shock. As a matter of fact, everybody inna shock, even the driva," Ryan said. "Boy wi feel it bad, but wi haffe si wid the driva. Wi know seh everybody haffe dead, but a the way how it happen mi boss."

Several other residents shared with THE WESTERN STAR, how they remembered Wright.

Several of her close ralatives, including her eldest son, were far too traumatised to speak, but nodded in agreement with the good words being spoken about the deceased.

"Mi boss from mi born mi know 'Ms Girlfriend' a sell fish," stated one youth who gave his name as Ricky. "Every day she gi wi food, money, and anything wi want. A nuff a wi a go suffer now, that 'Ms Girlfriend' dead."