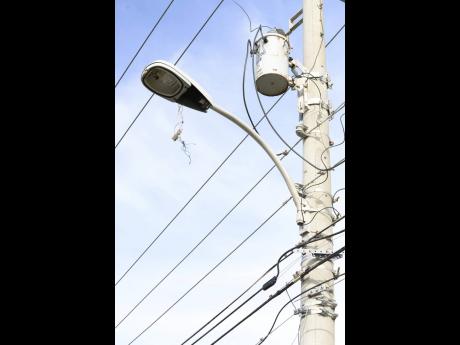 Located on the border of St Catherine and St Mary, Darling Spring is a quiet farming community whose residents are yearning for the erection of street lights in the area.

Speaking with THE STAR on the weekend, the residents said that they were extremely concerned about the safety of the children who have to be on the road early for school.

"There are lights working in some parts of the district, but in other parts it's really dark, even in the mornings. Some of the schoolchildren come out as early as 5:30 a.m., and at that time, the place black as night. It don't make any sense the Government wait until one a the little girls or boys get raped and killed before dem pay we any mind. You can't have light a one part and don't have street light at another place because is humans live everywhere. We nuh want any of we children dem make news," a disgruntled male said.

Another resident, Dionne Clarke, said that in addition to limited electricity, the community is also faced with water woes. The woman, who was on her way to fill a bottle with water at a nearby spring, said that that routine is the norm for most persons who live in the district.

"Everyone from near and far use this spring. Some of us call it 'Miss Turner Gully' because there was a lady by that name and it used to be her alone that lived at the top of the spring. But I can tell you that this spring has been so faithful to us. If it ever dry up, we dead from thirst. It has been quite a while since we don't have any water, so a lot of persons have to get up from very early to fetch water," she said.

Clarke said that she looks forward to the day when Darling Spring gets a facelift and becomes more developed.

"A whole heap a people never have electricity in their homes still. Whole heap a people still use lamp. I would want to see the community more developed. The place is free from violent crimes, so we are grateful. Praedial larceny happens every now and again, but it's nothing major. For the most part, this is a nice place. We just want it to have more resources for the youths," she said.