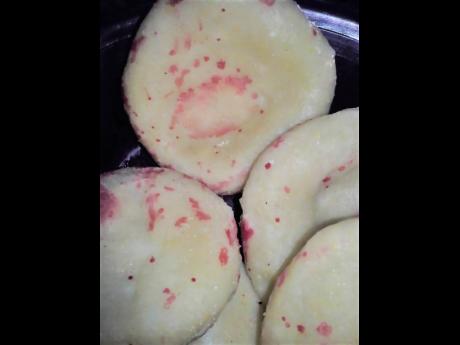 Some of the questionable dumplings.

Janet James* loves her dumplings, but of late, whenever she eats dumplings mixed with cornmeal, she notices that she has a pain in her stomach.

Now she is wondering if there is something in the flour or possibly the cornmeal that was affecting her.

She showed THE CENTRAL STAR photos of some dumplings that were left over from a meal she enjoyed one night last week. There were pink spots on them and some had more spots than others.

"I have never seen anything like this before. I honestly don't know if it is coming from the cornmeal or the flour," she said, adding that she bought both at a wholesale in May Pen.

James said she is now wondering about some of the food that she has been consuming and how safe they are.

"I just want to encourage all to buy Jamaican and try to eat more of our products, as, at the end of the day, you don't really know about the processes some of these foods we are eating go through," she said, pointing out that the experience has opened her eyes to be more careful about her eating habits.

James, who said she enjoys her 'flour dumplings', has never had anything like this happen before. Suspecting contamination to be the cause, she said she will not be using the rest of the flour she bought from the wholesale.

She has now become a campaigner for alternatives to flour. She said that the incident is probably a blessing in disguise as she has made up her mind to eat more bananas, breadfruit, and other ground provisions.

"Things are expensive, but we have to find creative ways of working with what we have locally. Our grandparents used to make dumplings out of cassava. Nothing wrong if we go back to those days," she said.

THE CENTRAL STAR contacted the Clarendon Health Department, who has now taken up the matter for investigation.